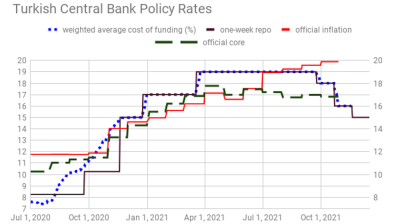 The policy rate was cut by another 100bp to 16%, the MPC announced, adding to the 300bp of cuts brought in at the committee’s previous two meetings.

"The sharp falls in the lira over the past few days clearly weren't enough for Turkey's central bank to stand up to President Erdogan," said Jason Tuvey at Capital Economics. "How events unfold from here is extremely uncertain."

The central bank also stated that it planned to complete the use of its “limited room” in December. However, the market was clearly scoffing at the factors listed in the MPC statement that were said to create the “limited room” as entirely baseless. Nevertheless, the statement should be taken as suggesting the regulator will cut the policy rate again at its rates meeting scheduled for December 16. Perhaps, by another 100bp.

Turkey, we find, is in the midst of another economic experiment. Anything is possible with ‘Erdoganomics’. Erdogan could at any time take a decision that will cause all expectations to turn 180 degrees. Conventional economics is not for him.

Research from Istanbul academics that concludes annual inflation in Turkey is in reality above 50%, compared to the figure just below 20% given by the official statisticians, is persuasive. And it looks set to rise further in the coming period. Turks, scrambling to protect their savings, are discussing “hyperinflation”.

On the lira loans front, no notable surge in the flow of loans has been observed so far.

The latest all-time weakest rate of the beleaguered Turkish lira (TRY) versus the USD was recorded at 11.2925 on November 18 after the rate cut decision was released, marking a day on day depreciation of around 6.5% (in the year to date, the depreciation is nearly 30%, in this quarter alone it is around 15%). Just days ago the debate was whether there was any chance that the lira would not sink below 10/$. Fat chance.

Five-year credit default swaps (CDS) on Turkey were, meanwhile, beyond the 450-level again.

July is more than seven months away. It is a long time for markets and many things could change. Fed chair Jerome Powell could, for instance, be replaced.

On December 15, the Fed’s open market committee will announce the results of its next meeting.

In foreign policy, there’s not been much noise in recent weeks, but Erdogan is never caught wanting in the pursuit of tensions with which he can make hay.

At home, Erdogan, seemingly frail and tired of late, appears somewhat resuscitated. The hot speculation on social media is that the doctors have doped him up. As regards the health of Turkey’s increasingly impoverished population, hunger is becoming more and more commonplace.

As always, though, Erdogan remains transfixed by the drive for headline growth. “We think we will reach double digit growth rates as of end-year,” Erdogan said on November 4.

In August, bne IntelliNews noted: “Our forecast [for the 2021 official annual GDP growth rate] has been moved into the double digits.”

This does not mean that the public “bidding” on the rate has ended. Far from it, it will come on stronger and stronger in the run-up to the GDP announcement date in March 2022.

So, this publication is raising its expectation to 15%.

National statistical office TUIK (aka TurkStat) will release the Q3 data on November 30.