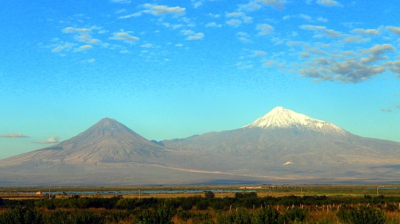 Climate activists have previously pointed to forecasting showing the glacier on Mount Ararat, which forms a near-quadripoint between Turkey, Armenia, Iran, and the Nakhchivan enclave of Azerbaijan, will soon be gone.
By bne IntelIiNews October 10, 2020

Turkey has already been hit hard by climate change and faces huge financial losses from it in the future, according to Murat Turkes, a member of the board at the Center for Climate Change and Policy Studies at Bogazici University in Istanbul, as cited by Hurriyet Daily News on October 9.

“For some time, winters in Turkey are tropical winters. We are living the effects of global climate change. We are in the middle of it,” Turkes was quoted as saying, adding: “We have the statistics, climate change and global warming have hit us. We face a loss of millions of dollars. Even new great damages await.”

Turkes reportedly referred to overly high temperatures, droughts and floods that Turkey has faced lately, saying Turkey has suffered global warming from as far back as the 1970s.

He was also reported as saying: “The first damage occurred in agriculture. Villagers in those days left their homelands and migrated to the big cities as they could not get products from the land due to climate change. Ths situation got worse in the 80s and peaked in the 90s.

“Since 1994, the average, highest day temperatures, even the highest night temperatures have skyrocketed.”

The number of “summer days” was increasing in Turkey, said the climate expert, noting: “Dense housing and asphalt roads are the main reasons. They absorb the day heat and release it at night. So temperatures during nights increased. Those who love to sit on balconies in the big cities easily feel and tell you the difference.”

The latest sanctions imposed on Iran by the Trump administration—said by Tehran to be so ... more