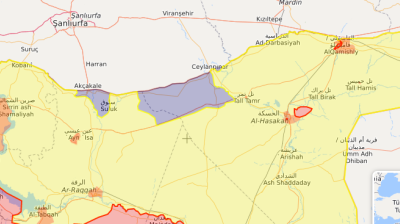 The initial international media coverage of US President Donald Trump’s October 14 decision to respond to Turkey’s incursion into northeast Syria with sanctions was rather witless.

As bne IntelliNews has been suggesting for several days now, Trump has shown a clear reluctance to go after his political pals in the Erdogan administration and what he’s come up with—in the face of building pressure from both Democrats and Republicans since his withdrawal of US forces simultaneously betrayed Kurdish allies of Washington and made the Turkish offensive possible—can be very well described as ‘fake sanctions’ and ‘sanctions lite’. How the Turkish markets loved it, with the Turkish lira raising Erdogan’s middle finger to the world by actually strengthening against the dollar following the so-called sanctions news.

“Minimal sanctions. A few individuals. A trade deal which was years off anyway. And steel tariffs up to 50%—Turkey hardly exports anything anyway. Window dressing from Trump. Likely relief in Turkish markets—they could have been much worse. Nothing on Halkbank,” Timothy Ash of BlueBay Asset Management said in an emailed note to investors, referring in his last point to the Turkish state lender that has long been exposed to potential sanctions since it was accused of playing a key role in a big Iran sanctions-busting case.

“Investors breathed a sigh of relief that harsher measures were avoided—there had been rumours that Turkish banks might be targeted—and local financial markets have rallied. The lira strengthened by as much as 1% against the dollar [to below 5.90] today... And the stock market is up by 1.5% [to over 95,000 on the benchmark BIST-100], partially reversing a 5% plunge yesterday,” Jason Tuvey of Capital Economics said on October 15 in a research note.

“Tickle torture”
“Am I bovvered? That's how I imagine the expression on [Erdogan]'s face last night when he received the list of sanctions imposed by [Trump]. Talk about Diet Sanctions. Far from "obliterating' Turkey's economy, the punishment meted out was akin to tickle torture. Some steel sanctions, scarcely worthy of the name, the stalling of trade agreements talks which were hypothetical anyway and possibly the worst of all, the despatch of that sanctimonious prig, [US Vice President] Mike Pence to Ankara [currently at an unknown time] to lecture the Turks on conducting invasions 'humanely',” Julian Rimmer of Investec responded in a note to investors.

“Far from stopping the Turkish army in their tracks, [E]rdogan, if anything, will be encouraged by the timidity of [Trump]'s penalties and will press on until they achieve their objectives... There may be another week of this unless there is an unforeseen excrescence in the conflict when volatile elements collide. I would probably still be avoiding Turkey for now despite the near 10% fall in banking stocks yesterday. There are too many variables in the narrative,” Rimmer added.

“The winner among all of this is, by common consent, [Vladimir] Putin,… Given Turkey's relegation to investment banking detention centre and punters' long-term dereliction of South Africa, Russia remains the only game in town,” he also observed.

Close coordination
Meanwhile, Erdogan’s Syria operation continues to advance like clockwork based on nods and winks from Washington and close coordination with Putin’s officials and military men who have pledged to make sure that there are no clashes between the Turks moving south and the Russian-backed Damascus regime forces moving north since they struck a deal to stave off Erdogan’s invasion with the deserted Kurds.

Turkish troops and the Erdogan-backed rebel jihadists are expanding their control in the area between the Turkish border and the M4 highway, a distance of roughly 30-35 kilometres, while the forces of Bashar al-Assad’s regime have been entering Kurd-held locations that no longer enjoy a US security umbrella.

The current course of events can be evaluated as similar to what occurred after Erdogan’s invasion of Afrin in northwestern Syria in March 2018, one month before his ultra-nationalist ally Devlet Bahceli called for snap elections that were held in June last year.

At the beginning of the Afrin operation, just as now, the global media was filled with various nations striking their public relations poses, while the Kurdish Democratic Union Party (PYD) and People’s Protection Units (YPG) were pushing the propaganda that they would defend the town against the threat of jihadism.

Later on, the PYD/YPG left the town to Erdogan’s jihadists on the order of the US and the Russian/Assad forces showed Erdogan where to stop.

Trump’s paltry sanctions name Turkey’s ministers of defence, energy and the interior, but they do not name Treasury Minister Berat Albayrak, who is Erdogan’s son-in-law.

If you hear of more ‘Turkey sanctions’ news, it may only be worth sitting up if they extend to Turkey’s banks or to broader USD financing and markets. Koon Chow, emerging markets strategist at UBP, was quoted by Reuters as saying the sanctions “did not touch state-owned banks as some investors had worried” and will have “low or little implication for capital flows into or out of the country”.

In other words, a nothingburger. The regularity and ease with which Trump pulls the wool over the eyes of the international media continues to bewilder and amaze.

LONG READ: Serbia’s hijacked protests
4 days ago
Divided Poland to choose more turmoil in presidential election on Sunday
5 days ago
No enthusiasm for July 15 election in North Macedonia amid relentless coronavirus epidemic
6 days ago
Mongolia to go ahead with Naadam festival, but with no tourists
9 days ago
Protests pose unprecedented threat to Turkmenistan’s authoritarian government
9 days ago