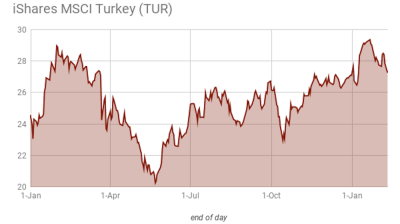 The most popular Turkey exchange-traded fund (ETF), the Nasdaq-listed and USD-denominated iShares MSCI Turkey ETF (TUR), has been hit by substantial losses. On January 21, it gained to its highest level since June 2018 at 29.36 but by February 10 it was 7% down on that level, closing the day at 27.25.

That level still compares higher than the figures in the 20s seen in May last year and the 22s seen in October. However, the ETF remains dramatically below its historical high of 79 seen in 2010.

TUR, the only ETF that offers pure exposure to the Borsa Istanbul, replicates the MSCI Turkey IMI 25/50 Index, which covers around 99% of the free float-adjusted market capitalisation on the Istanbul stock exchange.

“The [Turkish equity] market has corrected 6% from its tops [in January] and we would wait for another 4-5% pull-back for re-entry,” Akin Tuzun of VTB Capital said on February 5 in his monthly Turkish equities monitor entitled “Worth waiting for better entry points”.

Tuzun also noted: “Negative real interest rate [in Turkey where the benchmark rate is 11.25% but annual inflation stands at 12.15%] might not be sustainable… Turkey is the only country with negative real rates among its peer group of ‘fragile’ EMs from a currency perspective (such as Brazil, India, South Africa, Indonesia).”

Search for any reliable indicator

“The official foreign ownership data of the equity market maintains its ambiguity… The market (and we as well) takes the 10-year bond yield as a proxy for the long-term risk free rate in general; however, we think the most recent drop (from 12% to 10%) is not fundamental and is not sustainable, and thus continue to use 12% as the long-term risk free rate for Turkey,” Tuzun also said.

VTB’s analysts, meanwhile, said they saw the sovereign bond yield move from 12% to 10% as driven by state banks’ support, with little or no fundamental interest from international fixed income investors. They maintained their view that geopolitically driven sell-offs can be seen as buying opportunities.

Russian President Vladimir Putin was on February 11 set to discuss the tense situation in Syria with Turkish President Tayyip Erdogan by phone. There are mounting jitters over the stand-off in the northwestern Syrian province of Idlib between Turkish forces and Turkish-backed jihadist rebels and the Russian-backed forces of the Damascus regime.

Also on February 11, Erdogan, perhaps the only president in the world who regularly addresses his party’s caucus meeting in parliament, told his MPs that he would announce steps to be taken in Idlib on February 12.

There is a market perception, in VTB’s view, that the worsening relationship between Turkey and Russia, with the former moving more towards the West, can be seen as a positive for the Halkbank case in the US where the state lender has been indicted for evading Iran sanctions but has refused to appear in court.

VTB expects another 50bp rate cut from the central bank on February 19.

“The recent news on a preliminary investigation into banks by the Competition Board, and several fines on some banks regarding their insurance businesses, look like the early signals of regulatory pressure on the sector,” Tuzun also noted.

On February 10, the central banked imposed limits on commercial banking fees, stepping up the regulatory heat on local lenders.

Some foreign banks invested in Turkey’s banking sector are scaling down their commitments and, particularly in the case of HSBC, possibly heading for the exit. The deconsolidation of Turkish lender Yapi Kredi Bank will reduce UniCredit's exposure to Turkey's weak operating environment and will improve the Italian lender's regulatory capital by 50bp, a credit positive, Moody’s Investor Services said on February 7.

“Something weird going on in Turkey”

“Something weird going on in Turkey—foreigners are not involved in this TRY sell off, despite the BRSA  action on offshore SWAPS… Something seems to have changed... Any thoughts?” Timothy Ash of Bluebay Asset Management wrote on February 11 in an emailed note to investors.

The index has gained 1.6% in the past week as currency volatility plumbed record lows.