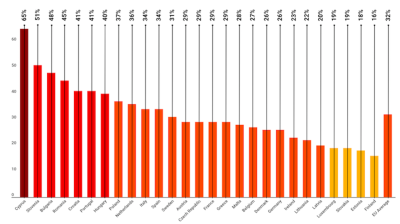 Transparency International asked EU citizens if they think corruption has increased in the previous 12 months.
By bne IntelliNews June 16, 2021

Citizens of Southeast European EU members are the most likely across the bloc to believe that corruption is rising in their countries, according to Transparency International’s Global Corruption Barometer – EU 2021.

Surveys carried out across the 27 EU member states show that as many as 65% of respondents in Cyprus think corruption has increased in the previous 12 months, while the figure for the four Southeast European EU members ranges from 51% in Slovenia to 41% in Croatia. More than 40% of respondents in Hungary and Portugal also consider corruption increased within the last year. 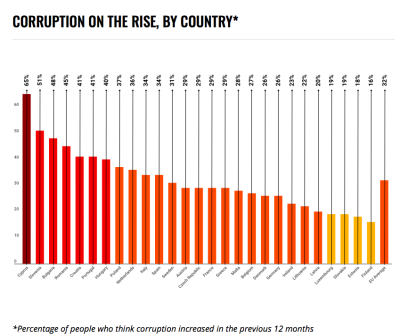 Citizens of Slovenia and Bulgaria were also likely to think their government was run by a few big interests looking out for themselves. This view was held by 68% of respondents in the two countries, with numbers almost as high in Cyprus, Czechia and Croatia. 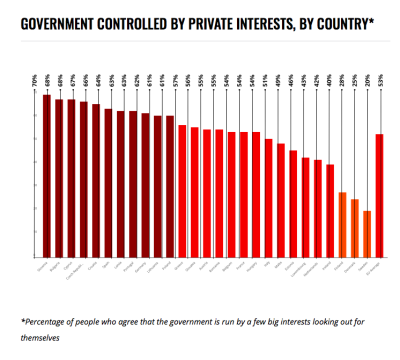 The use of “sextortion” – the abuse of power to obtain a sexual benefit or advantage – on people accessing public services was highest in Bulgaria, Croatia and Romania.

The perceived increase in corruption in Slovenia comes despite the country generally being considered one of the cleanest in emerging Europe. The last Corruption Perceptions Index published by Transparency International in January puts the country in 35th place worldwide, with only Estonia performing better among the countries from the region. Croatia also did relatively well.

By contrast, Bulgaria and Romania were among the worst performing EU countries on the index.

Bulgaria saw a seres of corruption scandals erupt during former prime minister Boyko Borissov’s last term in office, followed by further revelations of large-scale corruption in recent weeks after Borissov’s government was replaced by an interim government until the July snap general election.

Romania has also been plagued by high levels of corruption. However, the views among survey respondents of an increase in corruption in the country come despite the efforts of recent governments to put the fight against corruption back on track. There were hopes that Romania – once a strong anti-corruption reformer – could reverse the damage done through overhauls of the justice system and efforts to undermine the National Anticorruption Directorate (DNA) between 2017 and 2019.

Rising corruption isn’t only a problem in Southeast Europe, however. At least some respondents from countries across the EU told Transparency International they thought corruption had increased, though the figure was lower in some countries such as in the Baltic states and Scandinavia. Overall, around one of the study’s 40,000 respondents said they think corruption is getting worse in their country, while 44% believe it isn’t getting any better.

“Countries in the European Union (EU) are known for being wealthy, stable and democratic. However, this clean image is undermined by issues ranging from regional inequality and erosion of the rule of law to corruption problems,” said Transparency International.

The survey showed that while bribery to obtain access to public services was relatively rare, around three in ten people – which would add up to 106mn people across the EU – used a personal connection to access healthcare, education and other public services.

This wasn’t a phenomenon specific to the eastern EU members; it was most likely to occur in Czechia (57% of respondents) but more than 40% of respondents in Austria, France, the Netherlands, Portugal and Spain, as well as Hungary, admitted to using a personal connection to access public services.

Turkey’s manufacturing PMI hits six month high in July as virus brake removed
8 hours ago
Russia's GDP catches up with pre-COVID level
3 days ago
Heatwave pushes up spot electricity prices in Southeast Europe
3 days ago
Annual growth of Slovenia’s retail sales slowed to 12.8% y/y in June
5 days ago
73.8% of Montenegrins want their country to join the EU
5 days ago