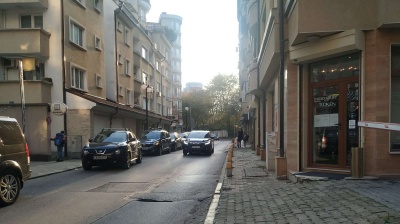 A Sofia street that is usually clogged with traffic is almost deserted on October 29.
By Denitsa Koseva in Sofia October 29, 2020

Nearly two-thirds of Bulgaria is now in the coronavirus (COVID-19) “red zone” due to the high number of new cases and there is no area where the spread of the disease has remained low, according to data from the country’s special team reported on October 29.

The situation in the country started worsening sharply in the past three weeks with the number of new cases peaking at nearly 2,800 within 24 hours on October 29.

In 18 of the 28 municipalities in Bulgaria the situation is causing concern as hospitals cannot treat more patients as they either lack beds or personnel.

Although the government has not imposed a curfew and pledges not to restrict movement of people, on October 29 the streets in the capital Sofia were unusually empty.

Mariana, 45, says she feels unwilling to attend her usual cafe even though she does not want to restrict her contacts and is only moderately concerned about the situation.

On the other hand, she is extremely worried that her son, who has just started his first year at high school, is at home after the health ministry decided that all high schools and universities must switch to online classes for at least two weeks.

Many parents fear that their children’s schools will stay closed for months and are worried about the psychological consequences. Some of them say they do not plan to isolate their kids completely even if schools are forced to stay online.

“I plan to rent a house with a few other families so that our kids can play together. It is insane – to isolate young children! It is emotional genocide,” said one father who wished to remain anonymous.

While Bulgaria’s Education Minister Krassimir Valchev supports the view that schools, especially primary schools, should not be closed as this is best for the children, he has indicated that such a decision might be taken soon by the health authorities. Many parents also fear that children will not return to schools after the October 30-November 2 break.

The number of top officials going into self-isolation due to contacts with people with coronavirus is rising.

On October 29, President Rumen Radev announced he is isolating himself as his secretary has a positive test for coronavirus, though the president says he is not ill at present. Prime Minister Boyko Borissov tested positive for the virus earlier this week. The tourism ministry will be closed for disinfection on October 30 as an employee has contracted the virus.

Meanwhile, the Bulgarian Academy of Science (BAS) announced that the country will have its own coronavirus vaccine by the end of this year. However, it would need further financing from the state to begin trials on mice and people, according to Penka Petrova, head of the Institute of Microbiology of BAS, quoted by Dnevnik news outlet.