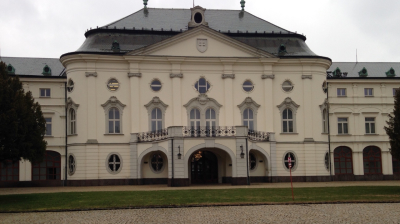 Robert Fico is still favoured to return to the government office, but the race looks increasingly tight. / bne IntelliNews
By By Benjamin Cunningham in Bratislava March 4, 2016

As a lethargic Robert Fico jousted with four other party leaders in the final debate before Slovaks take to the polls on March 5, there was little reason to believe the prime minister has halted his Smer party’s slide in the polls. Fico is still favoured to return to office, but the race looks increasingly tight.

“To me, the possibility of a Fico government or a centre-right coalition are 50-50,” says Grigorij Mesežnikov, president of the Institute of Public Affairs in Bratislava.

Smer, which dominates the centre-left of the political spectrum, has focused its campaign on security and the European migration crisis, but strikes by teachers and nurses have shifted the election narrative since the turn of the year — and Smer’s poll numbers along with it. Centre-right opposition leaders sought to highlight these issues during the March 2 debate, with Radoslav Prochazka, leader of the Siet party and Fico’s prime rival for the premiership, taking a lead role.

“The condition of the healthcare sector means the Slovak people are beginning to pay the price with their lives, it's a terrible sentence,” Prochazka, said. “Wanting people to risk another four years, it is irresponsible. People will die unnecessarily.”

In a tense exchange Fico addressed repeated scandals in the healthcare sector during his term in office. “There are several ministers being prosecuted, I am not saying it works 100%,” he said.

“Which ministers are being prosecuted?” Procházka responded, before the clash trailed off.

A polling moratorium went into effect on February 23, but Smer had 34.6% support in the last poll released on February 18, down nearly 6% from late 2015. Siet is second with 14%; followed by the hard right Slovak National Party (SNS) with 8.7%; Most-Híd, which draws on the Hungarian minority, has 8.2%; the Christian Democrats (KDH) have 7%; a coalition of the populist Ordinary People (OL’aNO) and the conservative NOVA parties have 6.1%; and the free market Freedom and Solidarity (SaS) party has 5.5%. A handful of others are hovering just below the 5% threshold required to get into parliament.

Ever the clever campaigner, Fico has done his best to make a push in recent days. In an attempt to cycle refugees back into the news, Fico visited Macedonia on the same day as the debate. During the final week of February he announced three major foreign investments in three different regions of the country. Six weeks before the vote, every Slovak household received a check for €10 to €165, purportedly a rebate for cheaper than expected natural gas.

“Why shouldn’t old people get money back for gas?” asked Milan Duhár, a 56-year old entrepreneur and Smer supporter based in the western Slovak city of Dubnica nád Vahom. “They don’t understand capitalism. This makes them feel good. I support it.”

Smer’s best case for re-election is the relatively strong macroeconomic conditions in the country. The economy grew at 3.55% last year, one of the fastest rates in the eurozone. Though still over 10%, unemployment is down and the budget deficit for 2015 is estimated at just 2.5%.

But there is almost no chance Fico will match the 44% of the vote that enabled Smer to win an outright majority in parliament in 2012. Election results similar to the recent poll numbers would leave him with little choice but to form a coalition with the SNS, or try to persuade one or two centre-right parties to cross over.

Still, even those options look to be in flux as anecdotal evidence points to more shifts in voter preferences in recent days. Bratislava is awash with rumours of a recent internal Smer party poll that found they were supported by  just 25% of voters. The SNS has also experienced turmoil as it jettisoned candidates amid talk of to-be-released corruption allegations — the party’s vice president Vladimír Chovan was taken off the ballot on March 3.

Even with a stronger than expected showing, a centre-right coalition is no sure thing either, and many would be wary of a return to the instability of Iveta Radicová’s 2010-2012 four-party government. The personality clashes that divide the centre-right were on full display at the March 2 debate and an anti-Fico coalition this time around would likely require five parties to cooperate.

Prochazka has long clashed with OLaNO chief Igor Matovic. Though the two look to have patched things up, the enigmatic Matovic and Most-Híd chief Béla Bugár also appear at odds. Bugár has repeatedly said he would find it difficult to cooperate with Matovic in a government.

In recent weeks Matovic also drew fire from Fico, when the prime minister personally held a press conference to accuse him of tax evasion, charges the OLaNO leader denies. Fico produced documents he claimed to receive from an anonymous citizen, which he then turned over to police. The episode was part of what Meseznikov called a “chaotic” Smer campaign effort.

“They wanted to weaken Matovic, but the effect was the opposite,” he said. “Smer is trying to speak to their constituency, but this is a demonstration of weakness.”

The Mariupol siege is over as the last Azov defenders surrender
38 minutes ago
Kyrgyzstan: Eccentric health minister fights for his job amid claims of corruption and bullying
14 hours ago
Azov commanders have remained behind in the Mariupol steelworks to continue the fight
15 hours ago
Russia hopes Chinese carmakers will help revive Moskvitch brand
16 hours ago
Russia may leave the WTO and WHO. In practice, it never really joined
16 hours ago