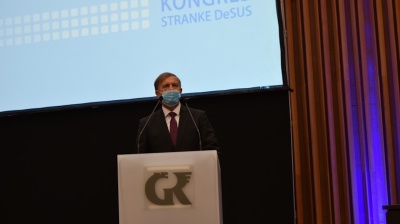 DeSUS leader Karl Erjavec is the opposition's choice for prime minister should it manage to topple the Jansa government.
By bne IntelliNews January 5, 2021

The move came less than a month after the council of DeSUS, which was formerly part of the four-party government, decided on December 17 to leave the Jansa cabinet. Both the opposition and members of the coalition led by Jansa are understood to be unhappy with what has been dubbed the “Orbanisation” of Slovenia since he returned as prime minister in March 2020. Jansa is a close ally of Hungary’s illiberal Prime Minister Viktor Orban.

“We see that the government is failing with the coronavirus epidemic, the independence of the institutions is being threatened, as well as the freedom of the media. We want to stop this de-normalisation of the country," Erjavec was cited by Zurnal24.

The signatures for the no-confidence motion will be secured from deputies from the List of Marjan Sarec (LMS), the Left, Social Democrats (SD) and the Party of Alenka Bratusek (SAB) and DeSUS.

The informal opposition coalition needs three more votes for a parliamentary majority in the 90-seat assembly. The opposition expects to get support from some of the ruling Slovenian Democratic Party (SDS), which is dissatisfied with the work of the current coalition.

Erjavec has already sent an invitation to SDS representatives for talks, but has not received a response.

Erjavec said he expects to receive 43 parliamentary signatures to file the motion in order, as he said, “to stop the destruction of the country”.

According to him, the opposition wants to see Slovenia in the company of the key EU countries.

"We do not see Hungary, Poland and the like as our main partners," Erjavec was cited as saying.

Erjavec made a similar point when he announced in December that DeSUS was quitting the ruling coalition, saying his party did not “want the ‘Orbanisation’ of Slovenia, an autocratic system, we do not want people to be afraid”.

He added that the party wants Slovenia to return to the “Franco-German train” and be part of the core group of states in the European Union.

While not exercising Slovenia’s veto, Jansa spoke out in defence of Hungary and Poland in the recent row within the EU over the next seven-year budget and recovery fund, in which the two Central European states temporarily blocked the funding package because it was linked to the rule of law.

There are also growing concerns about the state of the media in Slovenia under Jansa’s government. A swift downturn in press and media freedom has been observed in Slovenia since the new government under PM Janez Jansa came to power in March, the International Press Institute (IPI) said in September. Critics say Jansa’s SDS is trying through various means to extend the state’s control over the media. Meanwhile, MEPs told the European Parliament in November that businessmen close to Orban have been financing right-wing media in both Slovenia and North Macedonia.