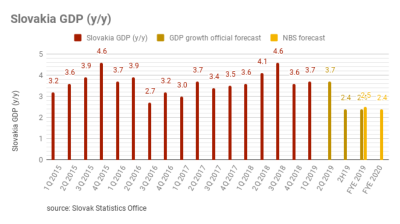 Slovakia’s National Bank (NBS) confirmed analyst’s expectations and worsened the country's economic growth outlook for 2019 and 2020 to 2.5% and 2.4%, respectively
By bne IntelliNews September 26, 2019

Slovakia’s National Bank (NBS) confirmed analyst’s expectations and worsened the country's economic growth outlook. NBS decreased its prognosis for both 2019 and 2020 by 0.8 percentage points to 2.5% and 2.4%, respectively, the NBS stated on September 24. For 2021 it expects a slightly improved figures at 2.7%.

“The Slovak economy is going downhill at the moment, but there is no abyss on the horizon yet,” said NBS governor Peter Kazimir at a press conference presenting the medium-term forecast, as quoted by voFinanciach.sk. Kazimir noted that economy has its natural cycle, but the downturn has been deepened by significant negative external factors, including Brexit, Middle East and tensions between the US and China.

Kazimir believes that the uncertainty will be around for some time. “Our obligation is not to panic and not to deepen it. We are convinced it is totally out of place to talk about a crisis and recession. What is in place is to be cautious and invest efforts into sustainable economy,” he added.

In 2021 Slovakia’s economy could be revived a little by the foreign demand. The NBS prognosis also counts with improved dynamics of private consumption and strengthened public sector. Development on the labour market exceeded NBS expectations in 2Q19, mainly due to a higher employment in public sphere and faster wage growth in both private and public sectors.

Weaker economic growth will, however, affect the labour market as well. In NBS revised prediction, employment is expected to increase at 0.3% in the two coming years and wage growth is also expected to slow down and its growth dynamics will stay around 5%. NBS also see inflation gradually decelerating and consumer prices rising to 2.4% in 2020.

In 2Q19, Slovakia's economic growth decelerated to 2% y/y mostly due to falls in industry and exports, balanced by growth in domestic demand. The last time Slovakia posted GDP growth below 2% was in 3Q13. An increase in domestic demand was driven mainly by the creation of gross capital with a growth of 11.9% y/y.

Earlier in June, the NBS worsened its outlook for economic growth in 2019, mainly due to expected weaker external demanad. This year, the NBS lowered its estimate of economic growth to 3.3%. Subsequently, the outlook was worsened by the Slovak Ministry of Finance, which should publish the new forecast in September.

Russia's services PMI falls for second month due to impact of coronavirus
19 hours ago
Romania’s industrial prices surge by 26.8% y/y in October
20 hours ago
Service sector and public spending save Hungary’s Q3 GDP
1 day ago
Kazakh manufacturing PMI shows return to contraction in November
1 day ago
Poland’s PMI climbs to highest point since August
1 day ago