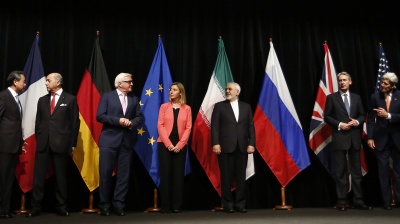 Officials seen at talks before the signing of the nuclear deal in 2015.
By bne IntelliNews November 29, 2019

Belgium, Denmark, Finland, the Netherlands, Norway and Sweden are set to join the much-delayed Instrument in Support of Trade Exchange (Instex) originally conceived as a payment mechanism that would allow European companies to conduct trade with Iran knowing that they would be shielded from US sanctions.

The Swedish government announced the planned move on November 29. Whether it will be of more than symbolic value in Europe’s attempt to persuade Iran to comply with, and hold together, the 2015 nuclear deal is, however, open to question. The accord—under which Iran is supposed to comply with measures designed to bar its way to any potential development of a nuclear weapon in return for the lifting of international sanctions—could be set to fall to pieces as soon as December because Iran accuses Europe of not doing enough to protect its trade and economy from US sanctions brought in after the Trump administration unilaterally yanked Washington out of the nuclear deal in May 2018.

Instex—put together by France, Germany and the UK—is actually an example of what the Iranians are complaining about. Europe started out with ambitious plans to conduct trade through the Paris-headquartered mechanism that the US would find sanctionable. However, of late, it has, at most, appeared to only explore Instex trading in food and humanitarian items that would not infringe the American sanctions regime.

Despite scepticism that an Instex with several more members will carry much more importance in attempts to save the nuclear deal than an Instex with just a handful of members, the countries planning to join the trade channel put out an extensive statement on their move, saying: “Belgium, Denmark, Finland, the Netherlands, Norway and Sweden attach utmost importance to the preservation and full implementation of the Joint Comprehensive Plan of Action (JCPOA) [the formal name of the nuclear deal] on Iran's nuclear programme by all parties involved. The nuclear agreement was unanimously endorsed by the UN Security Council (UNSC) and is a key instrument for the global non-proliferation regime and a major contribution to stability in the region.

“In light of the ongoing European support for the agreement and the ongoing efforts to implement the economic part of it and to facilitate legitimate trade between Europe and Iran, we are now in the process of becoming shareholders of the Instrument in Support of Trade Exchange (Instex) subject to completion of national procedures.

“In this context, it is crucial for the Islamic Republic of Iran to return without delay to full compliance with the terms and provisions of the nuclear agreement.”

Iran on November 28 rejected as “irresponsible” comments by France that it is seriously contemplating triggering a complaints mechanism within the nuclear deal that could lead to “snap-back” UN sanctions. France relayed its latest standpoint following a European Union announcement earlier this week that officials from remaining nuclear deal signatories China, Russia, France, Germany, the UK and Iran will meet in Vienna on December 6 to discuss how to uphold the deal.

Iran has in recent months been scaling down its compliance with the accord with an eye on resigning from it if the Europeans do not respond to the non-compliance pressure by providing economic assistance.

Responding to the latest French position, Iranian Foreign Ministry spokesman Abbas Mousavi said on state television: “Iran’s scaling back of its nuclear commitments [outlined in the 2015 deal] was implementation of its legal rights to react to America’s illegal and unilateral exit of the deal and the European parties’ failure to fulfil their obligations.

“Under these circumstances, the deal does not allow triggering of the mechanism by the European parties to the deal ... such remarks by the French official are irresponsible and not constructive.”

The mechanism involves a party referring a nuclear deal compliance dispute to a joint commission comprising of Iran, Russia, China, the UK, France and Germany (the remaining nuclear deal members) as well as the European Union. If the commission cannot resolve the issue, then the dispute is sent to the UN Security Council.

If the Security Council does not vote within 30 days to continue sanctions relief, sanctions brought forward under previous UN resolutions would be reimposed in a “snap-back”.

France is concerned by Tehran’s mounting non-compliance with the nuclear deal, abandoned by the US in May 2018.

For Sweden and the rest of the EU, it is essential that Iran does not leave the JCPOA, the Stockholm government added.

In early September, a French diplomatic source said Instex would not work until Tehran set up a mirror company and met international standards against money-laundering and terrorism financing.

Much proposed Instex trading has been conceived as bartering and both Iran and Russia—which has previously suggested it might join the scheme—have said the bartering should be allowed to include Iranian oil, but Europe has not given its consent to such a move given that it would certainly incite US officials who are engaged in an effort to drive all oil exports from Iran off world markets.

However, Iran was in full compliance with the accord when the US walked out of it, breaching diplomatic convention.

Analysts weighing up likelihood of wave of food nationalism and protectionism as coronavirus roils markets.

With academics warning Turkey may face pandemic “catastrophe”, local corporate titans suggest it might be better for country to bite bullet and go for short, sharp shock rather than long, drawn-out battle.

Hungarians are only allowed to leave their homes to go to work or to run essential errands, PM Viktor Orban announces, as virus reaches the community transmission stage.

The Hungarian National Bank projects a growth slowdown, but still expects Hungary to perform better than eurozone countries. Most analysts take a gloomier view and forecast a recession.

After a vintage 2019, almost €2bn worth of deals were expected to close in the hotel sectors of six Central and Southeast European countries this year, but these are looking increasingly unlikely to complete, says a report from law firm CMS.