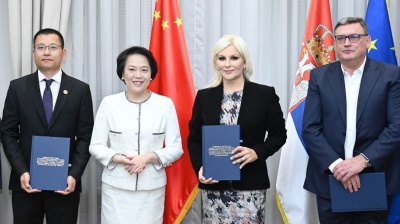 Serbia’s infrastructure ministry on June 10 said it has signed a €158mn deal with China's Shandong Hi-Speed Group (SDHS) for the construction of a high-speed road linking Valjevo to Milos Veliki motorway, which is part of European transport Corridor XI.

Corridor XI runs through Serbia from the country's northeastern border with Romania to the southwestern border with Montenegro. The corridor links Italy's Bari to Romania's Bucharest via Montenegro's Bar port and Serbia's Belgrade.

The construction of the 18.3 km high-speed road will start on June 17, the infrastructure ministry said in a statement.

As part of the construction works, the flow of the Kolubara river will be regulated to prevent further flooding.

In January, Serbia revealed a €14bn five-year investment programme, including €9bn for infrastructure and roads.

In December 2019, the World Bank said that Serbia needs to implement a new, ambitious growth agenda in order to get closer to the levels of prosperity in the EU after making significant progress after the ex-Yugoslav wars in the 1990s to curb hyperinflation and restore broken infrastructure.

Pristina mayor Shpend Ahmeti said on June 25 that Serbian state-owned telco Telekom Srbija has placed the highest bid worth €155mn to acquire its Kosovan peer IPKO Telecommunications, but that ... more