Russians consider the US to be the number one “unfriendly country” 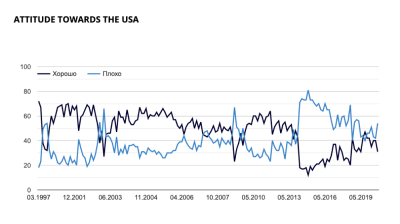 Following the fall of the Soviet Union 80% of Russians saw the US as a friendly country, but following the annexation of Crimea and the imposition of sanctions today 54% see it as an unfriendly country
By bne IntelliNews June 16, 2021

Russians consider the United States to be the number one “unfriendly country” and that feeling is on the rise again, according to the latest poll by the independent pollster the Levada Center.

Separately, Russian President Vladimir Putin maintains a much lower level of global trust than his Western counterparts, according to a Pew Research Center poll published June 14.

That changed dramatically following the annexation of the Crimea in 2014 when Russian President Vladimir Putin played on the “enemy at the gate” sentiments and Russian nationalism as the US led the West in imposing sanctions on Russia.

In recent years the feelings towards the US, while remaining negative, were improving, but most recently they have turned negative again, with those that believe the US is an “unfriendly country” rising by 6pp to 54% in May, with another 31% seeing it as a friend, according to a Levada survey released on June 15. That is up from 42% that saw the US as unfriendly and 40% that saw it as a friend in March.

The attitude of Russians towards the European Union is also continuing to deteriorate. In January 2021, 45% of respondents had a positive attitude towards the EU against 37% with a negative attitude. In March, these indicators were 38% and 45% respectively. The last time that these levels of approval were seen was in late 2018 and early 2019, according to Levada.

Amongst the other countries Russians believe are unfriendly, Ukraine takes second place, where 40% of Russians see it as an unfriendly country, up 5pp since last year.

In third place is the UK, followed by the Baltic states, Poland, Germany, Georgia and the Czech Republic, which are all in the top ten.

From its friends, Belarus continues to rank as number one; 58% of respondents see Belarus as a friendly country. This attitude has been strengthening since 2013 and has stabilised at 58-62% over the past three years, says Levada.

The second amongst Russia’s perceived friends is China (38%), which has retained the same level that only fluctuated within the statistical margin of error over the past few years.

In third place as a friend is Kazakhstan (34%) which has seen a slight decrease since 2019.

The top ten for friends also includes Armenia, India, Azerbaijan, Kyrgyzstan, Syria, Germany (the only European country in the TOP10) and Cuba.

In general, 83% of Russians are sure that Russia has enemies, 13% believe that it does not. Compared to 2020, the changes are insignificant.

In related news a Pew Research Center poll found that Putin enjoys the trust of a median of 22% of respondents in 17 advanced economies, including the United States, who believe that the Russian president will “do the right thing regarding world affairs,” Pew said, as cited by the Moscow Times. This year’s results mark a drop of one percentage point from 2020.

At the same time 29% of respondents said they have “not too much confidence” and 45% have no confidence at all in the Russian president.

"Negative views of [Putin] are at or near historic highs in most places," the Pew Research Center said.

The global confidence in Chinese leader Xi Jinping is even lower at a median of 20%, according to Pew, and currently at a historical low.

US President Joe Biden (74%) in his first year in office immediately overshot his predecessor Donald Trump in the same poll, who saw even lower global confidence than Putin during his tenure as US president.

Pew found that younger respondents in at least 12 countries, including the US, were more likely to express confidence in Putin than their older counterparts.

“These age-related patterns have often been prevalent in views of Putin. And when it comes to opinion about Russia more generally, younger adults also tend to have more favourable views of the country than older people,” Pew said, as cited by the Moscow Times. 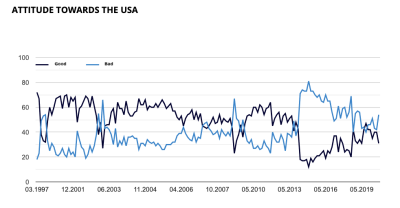 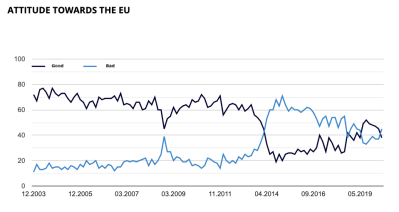 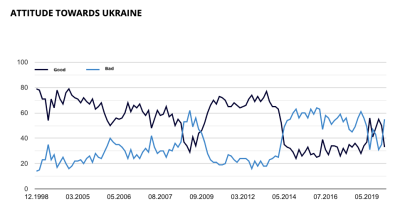