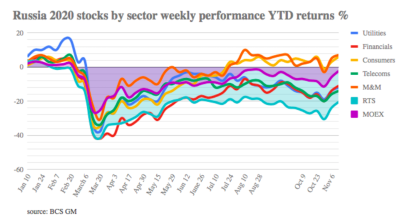 Russia's leading RTS stock market index gained 4.3% on November 9 on the news that Pfizer has a working coronavirus vaccine
By Ben Aris in Berlin November 10, 2020

Russian stocks and the ruble jumped in value on November 9 following the conclusion of the US election and an announcement by US pharmaceutical firm Pfizer that it has a working vaccine against coronavirus (COVID-19).

The dollar-denominated Russia Trading System (RTS) gained 4.3% on the day and broke back above the 1,200 mark after languishing at around 1,000 for the last few weeks as investors left emerging markets (EM) on the back of fears of a persistent and damaging second wave of the pandemic sweeping the planet.

The Russian market was doubly hit as the same fears depressed oil prices that slid from earlier highs of around $45 to around $37 as oil producers predicted that demand next year would be reduced by the pandemic.

The ruble-denominated MOEX Russia Index also made gains, rising 2.3% on the day.

The ruble also made gains on the good news, and was up 2% on the day to end at RUB76.34 against the dollar and RUB90.19 against the euro. The currency reached an intra-day high of RUB75.9 against the dollar, amongst its highest value in recent weeks. The ruble has now gained almost 6% from where it stood on the eve of the US presidential election.

The ruble has taken a beating this year and is seen to be heavily undervalued at the moment due to the weight of multiple problems, including the threat of new sanctions on Russia imposed by the incoming Biden administration in the US, following the presidential elections there.

Pfizer and its German partner BioNTech said their vaccine, currently in Phase 3 medical trials, was 90% effective in preventing COVID-19 infections. It is the most detailed and promising public update yet published on vaccine effectiveness from one of the handful of vaccines which have undergone widespread testing among volunteers.

Russian authorities also announced that its Sputnik V vaccine was also 90% effective. It was one of the first vaccines to appear, but the public remain very sceptical about its effectiveness.

Russia’s biggest winners were stocks which have suffered heavily this year amid unprecedented shutdowns of the global economy – airlines and oil companies.

The rest of the sectors are still underwater from where they stood at the end of February, but most of them gained 2-3ppt on the day. Most noticeably the oil & gas sector was lifted 8ppt from a -42% lost YTD to end the day down at -36%. However, that is still down from the roughly 33% loss the sector was showing a month ago, and investors remain very sceptical of the sector.

The best performer of the day was Aeroflot, which added almost 8% on the day as of 4pm Moscow-time, while energy companies Lukoil, Tatneft and Novatek claimed the next three spots on the leader board.

Still, Russian gains lagged the market increases across Europe, where the London benchmark FTSE 100 was up by more than 5% and the Eurostoxx 50, which tracks the 50 largest companies based in the Eurozone, added more than 6%, reports the Moscow Times.

Markets have also been lifted by Joe Biden’s victory in the US elections. While Biden is anticipated to be tough on Russia and introduce more sanctions, those fears are offset by the return to more predictable “normal” politics that will allow better forecasting. Also a key change will be that Biden is expected to abandon US President Donald Trump’s policy of starting trade wars, which is very damaging not only for the balance of payments, but has also proved a big disincentive to foreign investors, who increasingly invested in the US as a hedge against getting caught up in a trade war. That is expected to change now, with US capital going overseas again under Biden in the hunt for better returns, according to Charlie Robinson, chief economist at Renaissance Capital.