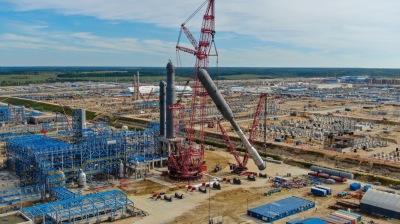 Russia's Sibur petrochemical giant has closed a deal to build the Amur Gas Chemical plant with China's Sinopec that will target the Asian polymer market / wiki
By Ben Aris in Berlin December 29, 2020

Russia’s leading petrochemicals company and one of the most rapidly growing petrochemicals businesses globally, Sibur Holding, and China Petroleum & Chemical Corporation (Sinopec), China’s leading energy and chemical company, have closed a $11bn deal to set up a joint venture at the Amur Gas Chemical Complex (Amur GCC) after obtaining all the necessary approvals from the regulators of both countries, Sibur announced in a press release on December 28.

The long discussed project has been in the works for years and follows on from the completion of the ZapSibNeftekhim petrochemical complex (ZapSib) in 2020, another major expansion of the company’s production capacity that was profiled by bne IntelliNews in ““Plastics in the snow” in 2018.

Sibur and Sinopec signed off on a provisional agreement to build the Amur Gas Chemical complex in June 2019, as bne IntelliNews reported at the time at a signing ceremony attended by President of the People's Republic of China Xi Jinping and Russian President Vladimir Putin at the St Petersburg International Economic Forum (SPIEF) investment forum.

“The partnership will allow the parties to tap into shared expertise and experience to maximise efficiency of new large-scale projects and to exchange best practices”, said Dmitry Konov, chairman of the management board at Sibur Holding, at that ceremony. 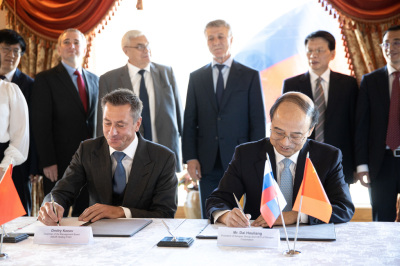 Under the terms of the final agreement Sibur and Sinopec will hold 60% and 40% respectively in the Amur GCC joint venture, the company said.

The main terms and conditions of the potential joint venture were agreed in 2019 that began the process of getting all corporate and regulatory approvals required to close the deal, which has now been completed. Following the deal, the parties will gain joint control over Amur GCC.

Set to become the world’s largest basic polymer production facility, Amur GCC will have a capacity of 2.7mn tonnes per year, including 2.3mn tpy of polyethylene and 400,000 tpy of polypropylene, and will be producing a wide range of grades.

The construction of Amur GCC proceeds in sync with the gradual ramp-up of Gazprom’s Amur Gas Processing Plant to its full capacity, so that the latter could supply ethane and liquefied petroleum gas (LPG) to Amur GCC for processing into high value-added products. The completion of construction and commissioning is scheduled for 2024. The creation of Amur GCC is part of Sibur’s strategy to move up the value chain and produce more valuable hydrocarbon products from the feedstock supplied by Russia’s major oil and gas producers.

“The Amur GCC project will help attract international investments in the Russian economy while also making a considerable contribution to the national programme of growing the nation’s non-commodity exports. Given the facility’s geography, its products will be targeting Asian markets, primarily China, which is the largest consumer of polymers globally. The Amur GCC project is expected to be included in an intergovernmental agreement between Russia and China,” the company said in its press release.

In keeping with the ongoing move towards environmental, social and governance (ESG) compliant production, Sibur stressed the project would follow the highest global environmental and technology standards, in particular through its reliance on renewable energy sources.

Amur GCC’s construction budget is tentatively estimated at $10bn to $11bn and is subject to adjustments as the project progresses. In December, Amur GCC attracted $1.5bn in bridge financing from a syndicate of Russian banks. Gazprombank acted as the lead arranger and lender, with Otkritie and Sberbank as arrangers and lenders.

Dmitry Konov, chairman of the management board at Sibur Holding, said: “Sibur and Sinopec have a long track record of jointly delivering on large-scale investment projects and implementing advanced production technologies. Creating a joint venture is a major milestone in our Amur GCC project. With Sinopec’s involvement, we will be able to maximise the project’s efficiency, in particular optimising and balancing the facility's future debt portfolio, while also enhancing its expertise in distribution across Asian markets.”

Zhang Yuzhuo, chairman of Sinopec, added: “Amur GCC is a milestone in the co-operation between Sinopec and Sibur, and will also become a model for Sino-Russian energy co-operation to extend to the downstream chemical industry. The success of Amur GCC will inject new impetus into advancing the high-quality co-operation between the two countries in the fields of energy, chemical industry, investment, economy and trade and play a positive role in effectively promoting the sound interaction of domestic and international markets as well as the economic development, employment and social well-being of the Far East region.”