Russian inflation up to 4.4% in November 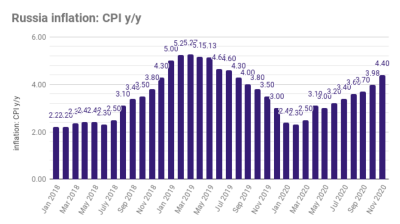 Russian consumer price inflation accelerated to 4.4% year on year in November 2020, up from 4% seen in October and breaching the Central Bank of Russia (CBR) target rate of 4%, according to the latest data of Rosstat statistics agency.

As reported by bne IntelliNews, inflation predictably accelerated towards the CBR target in autumn. The regulator maintained the key interest rate unchanged at 4.25% in October, since when price growth has hit its target of 4%.

Consumer prices added 0.7% month on month in November, compared with 0.4% m/m growth the month before.

Sberbank CIB argues that the higher price growth was mostly the result of a weak ruble (losing 11% against the dollar in 3Q20) and unfavourable weather conditions (agricultural output was down 6.6% y/y in October versus a 1.4% growth in September).

As the effect from these factors will likely be temporary (the ruble gained 4% against the dollar in November), inflationary pressure will likely ease in the following month, the bank believes, expecting inflation to end this year close to 4.5% and slow to 3.0-3.5% by the end of 2021.

"In its most recent communications, the CBR’s management said that it still sees room for additional monetary easing. This signal had not changed since July when the CBR cut its key rate last time," BCS Global Markets commented on December 7.

"However, the CBR does recognize that – given the recent acceleration in CPI growth – their ability to cut rates is clearly capped on a S-T horizon," the analysts note.

Provided that, as BCS GM expects, inflation trend starts to reverse from March 2021 onwards, the CBR could have a bit more room for monetary easing. "We would not be surprised to see another 25bp rate cut sometime in mid-2021," the analysts wrote.

At the same time, if the recovery in global and Russian economies gains pace next year, chances are that a rise in economic activity could boost demand and lead to an increase in pressures on prices.

Under this scenario, the CBR might choose to keep its rate policy unchanged. For this year, with one CBR policy meeting remaining in December, BCS GM forecasts that the CBR’s key rate will remain flat at 4.25% up until 2021.