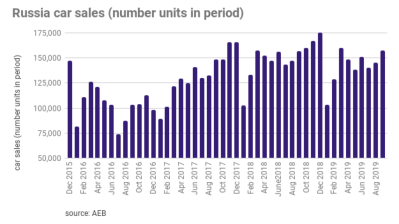 Russia's car and LCV sales declined just 0.2% y/y to 157,129 units in September, which resulted in a YTD decline of 2% y/y to about 1.3mn units, according to the latest data from the Association of European Businesses (AEB).

Analysts believe some improvement was likely due to the increased government support in 2H19. However, consumer sentiment remains weak, so they project that FY19 sales will be slightly negative.

“We highlight the recent strong sales of the Ford Transit, which are now consolidated by Sollers (Buy; 12-mo TP RUB450, ETR 54%), along with some improvement in UAZ sales. This supports our positive view on the name (see our Sollers – Back on radar screens; upgrade to Buy, of 2 October for more details),” VTB Capital (VTBC) said in a note.

Sollers started to consolidate Ford Transit sales from 2H19. The sales of the model increased 30% y/y to 1,408 units in September, while the July-September sales were up 21% y/y to 3,598 units. "We continue to see the Ford Transit as the key source of growth and profitability for Sollers in the near to medium term," said VTBC. Meanwhile, UAZ sales were up 3% y/y to 3,555 units in September, although still down 3% y/y to 26,331 units in 9M19.