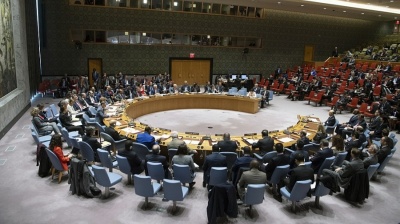 At a meeting of the UN General Assembly on Thursday, 7 April, 93 members voted in favour of the diplomatic rebuke, while 24 were against and 58 abstained. / wiki
By bne IntelliNews April 8, 2022

The United Nations General Assembly (UNGA) voted to suspend Russia from the UN Human Rights Council for “gross and systematic violations and abuses of human rights" in Ukraine on April 7.

A total of 93 countries voted in favour of a motion to remove Russia from the 47-member Geneva-based Human Rights Council for alleged atrocities committed by Russian forces since its attack on Ukraine on February 24, the most serious being a massacre in Kyiv’s suburb of Bucha on April 3, where retreating Russian soldiers murdered a reported 350 civilians in cold blood.

However, Russia has some support in the UN and a total of 24 countries voted no and another 58 chose to abstain. The motion needed a two-thirds majority to pass, as Russia and the other Security Council members have no veto in the 193-member General Assembly votes.

Russia's deputy UN Ambassador Gennady Kuzmin called the vote an "illegitimate and politically motivated step" and then announced that Russia had decided to quit the Human Rights Council altogether, Reuters reports. Russia was serving a second year of a three-year term on the Council.

The motion was introduced by Ukraine’s UN ambassador Sergiy Kyslytsya, saying that Russia has committed “horrific human rights violations and abuses that would be equated to war crimes and crimes against humanity”.

“War criminals have no place in UN bodies aimed at protecting human rights,” Ukraine’s foreign minister, Dmytro Kuleba, tweeted in response. “Grateful to all member states which … chose the right side of history.”

Russia had warned countries that a yes vote or abstention will be viewed as an "unfriendly gesture" with consequences for bilateral ties, according to a note seen by Reuters. And the threat may not be empty. Russian President Vladimir Putin warned earlier this week that Russia may restrict or ban exports of its commodities to countries on its “unfriendly” list, which could play havoc with their economies. In particularly Putin singled out restrictions on wheat exports that may cause a “global food crisis,” the Russian president said.

Amongst the “no” votes were Russia’s traditional allies including China, Belarus, North Korea, Syria and Russia’s best ally in Africa, Eritrea. However, in this vote among the countries that added their names to the “no” vote was Algeria, and Egypt, Tunisia and Yemen were among the "abstain" voters; these four countries are all heavily dependent on Russian grain supplies.

Another group that chose to abstain that had voted in favour of the previous condemnation of Russia's invasion of Ukraine vote were the Middle Eastern countries and various offshore havens that have good ties with Moscow. This group included Bahrain, Iraq, Jordan, Kuwait, Oman, Qatar, Saudi Arabia, Singapore and the UAE. The Arab nations voted unanimously to condemn Russia’s invasion of Ukraine, but all chose to abstain in this vote. Pakistan also chose to abstain; it is eyeing the possibility of buying oil and gas from Russia via pipelines running through Central Asia and Afghanistan.

The decision to suspend Russia could have been reversed at a later date, but Russia’s decision to quit the Council means it can now no longer easily re-join it. The US also quit the Council in 2018 under US president Donald Trump because of the “chronic bias against Israel” and a lack of reform of the Council’s work, but re-joined last year after US President Joe Biden took over.

"We ensured a persistent and egregious human rights violator will not be allowed to occupy a position of leadership on human rights at the UN," she told the assembled delegates.

While the Council has no powers of sanction it can order investigations into potential human rights abuses and has already opened an investigation into possible war crimes by Russia in Ukraine.

Russia’s allies either voted against the resolution, including China, or abstained, like India; these states have thrown their support behind Russia in its showdown with the West.

"Such a hasty move at the General Assembly, which forces countries to choose sides, will aggravate the division among member states and intensify the confrontation between the parties concerned – it is like adding fuel to the fire," China's UN Ambassador Zhang Jun said before the vote, Reuters reports.

The decision to expel Russia from the UNHRC will be welcomed by Ukraine, which has criticised the body for failing to act decisively. Ukrainian President Volodymyr Zelenskiy gave an impassioned speech to the UN Security Council just two days earlier, challenging the organisation to expel Russia or “dissolve yourself altogether”. He showed the assembly a video with harrowing images of dead civilians, who he said were killed by Russian soldiers before their retreat from the north of Ukraine, to drum home his point. 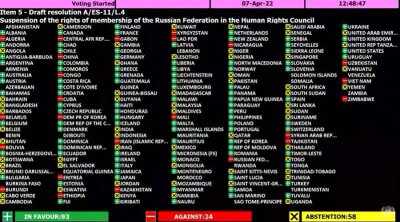