The breakeven price of oil needed to balance the budget has fallen to $53 / bne IntelliNews
By Ben Aris in Moscow January 26, 2018

Russia Inc is back in profit. Cost cutting and a crackdown on the wasteful spending caused by corruption has reduced the price of Urals blend oil needed for the federal budget to breakeven to $53, according to Renaissance Capital’s calculations.

Oil hit $71 a barrel on January 25 for the first time since 2014, supported by OPEC-led supply curbs, a record-breaking run of declines in US crude inventories and a weaker dollar.

That means currently the government is earning more from taxes on oil exports than it expects to spend this year. The official federal budget deficit for 2018 was pencilled in at minus 3.2% GDP, but Russia’s government is more likely to run a surplus for the first time in almost three years – if the average oil price for this year comes in at over $53.

Things started to go wrong in 2011 as the petro-driven growth model was exhausted and by 2013 growth fell to zero despite the fact that oil prices were still over $100 and the state was still pouring cash into projects. Even back then the government started paring back the spending and pushing efficiency as it became increasingly obvious that simply spending a lot of money was not going to produce more growth.

The process dramatically accelerated after oil prices collapsed at the end of 2014. The breakeven price of oil for the budget tumbled along with the cost of a barrel to first $98 in 2014, then $60 last year and is expected to be $53 this year, according to RenCap.

“We estimate that a breakeven oil price for the budget is now at around $56 Brent in 2018. The idea is that the ‘primary balance’ of the budget (i.e. balance before interest expenses) becomes zero at $40 since 2019; while the overall balance would be at around 0.8% of GDP (which equals interests costs). So the debt issuance is used only to finance the costs of servicing debt,” says Oleg Kouzmin, chief economist for Russia at RenCap.

The fall in the breakeven price of oil is one of the reasons why the Kremlin has been willing to cooperate with OPEC for the first time, as the resulting increase in oil prices from around $40 to over $50 has been enough to put Russia’s economy back into the black. Most of the other members of OPEC are not so lucky and still have breakeven prices for their budgets of $80 or more.

Drilling into the details of the budget then budget revenues have been rising very slowly in between 2014 and 2017 from RUB14.5 trillion to RUB14.7bn, but have actually decreased as a share of GDP over this period from 18.3% of GDP to 16%.

At the same time expenditures have risen faster over the same period – partly due to heavy spending on defence – from RUB14.8 trillion to RUB16.7 trillion and but shrank slightly as a share of GDP 18.7% to 18.1%.

These differences mean that the Russian budget is running a deficit of between RUB2 trillion and RUB3 trillion for three years, which is what caused Ministry of Finance such a problem in 2016 as it had no means to cover the shortfall.

This year all that could change if oil prices stay high. Even the official modestly optimistic forecast scenario has revenues rising to over RUB15.2 trillion which will bring the headline deficit down to 1.3% GDP – and that is assuming an average price of oil of about $44. As the chart shows, above $45 per barrel the Russian government starts earning some serious money from its oil exports. 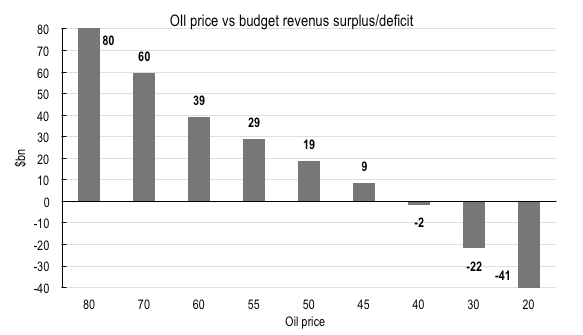 Russian Finance Minister Anton Siluanov was looking almost smug at the Gaidar Forum in Moscow in January. He already had a big feather in his cap from reducing the federal budget deficit to 1.4% of GDP in 2017.

Expenditures exceeded revenues by RUB1.3 trillion in 2017, which was much better than Siluanov had been expecting at the start of the year. Back in December 2016 the Finance Minister was expecting a deficit of RUB1.675 trillion, or 1.8% of GDP and the budget law had set the forecasted 2017 deficit even higher at - 2.5% GDP.

But now Siluanov has promised to turn Russia into a "second Norway." If the high oil prices hold, the Finance Ministry expects to raise an additional RUB3 trillion rubles from oil and gas revenues in 2018, as a result of 2018 may end up with a surplus of 2% instead of the deficit in the budget of 1.3%, Siluanov told the delegates at the Gaidar forum.

"Russia must turn into the second Norway, which does not feel any changes from the oil price fluctuations that took place the last few years, due to the fact that it pursued a balanced and conservative budget policy," Siluanov said.

The deficit is now already small enough that Siluanov can easily finance it from just tapping the domestic bond market (where a third of the investors are actually foreigners holding about $20bn of Russian debt).

But maybe the most significant change the falling importance of oil money has brought has been the decoupling of the value of the ruble from the price of oil.

As the chart below shows the ruble used to move in lockstep with the price of oil, but following the fall in prices, and the associated devaluation, the relation has weakened. Now the government has returned to the “budget rule” which siphons off any excess revenues to the National Welfare Fund, the link has broken almost completely; surges in oil prices no longer automatically feed through to surges in budget spending.

“We have got stability now,” Siluanov said at the forum. “But we have to go beyond that. The growth and the fall of the deficit is welcome but what it brings is not just stability, but predictability. That is the point of the budget rule; its not there to accumulate reserves. Its there to increase the predictability of the economy for business and for investors.” 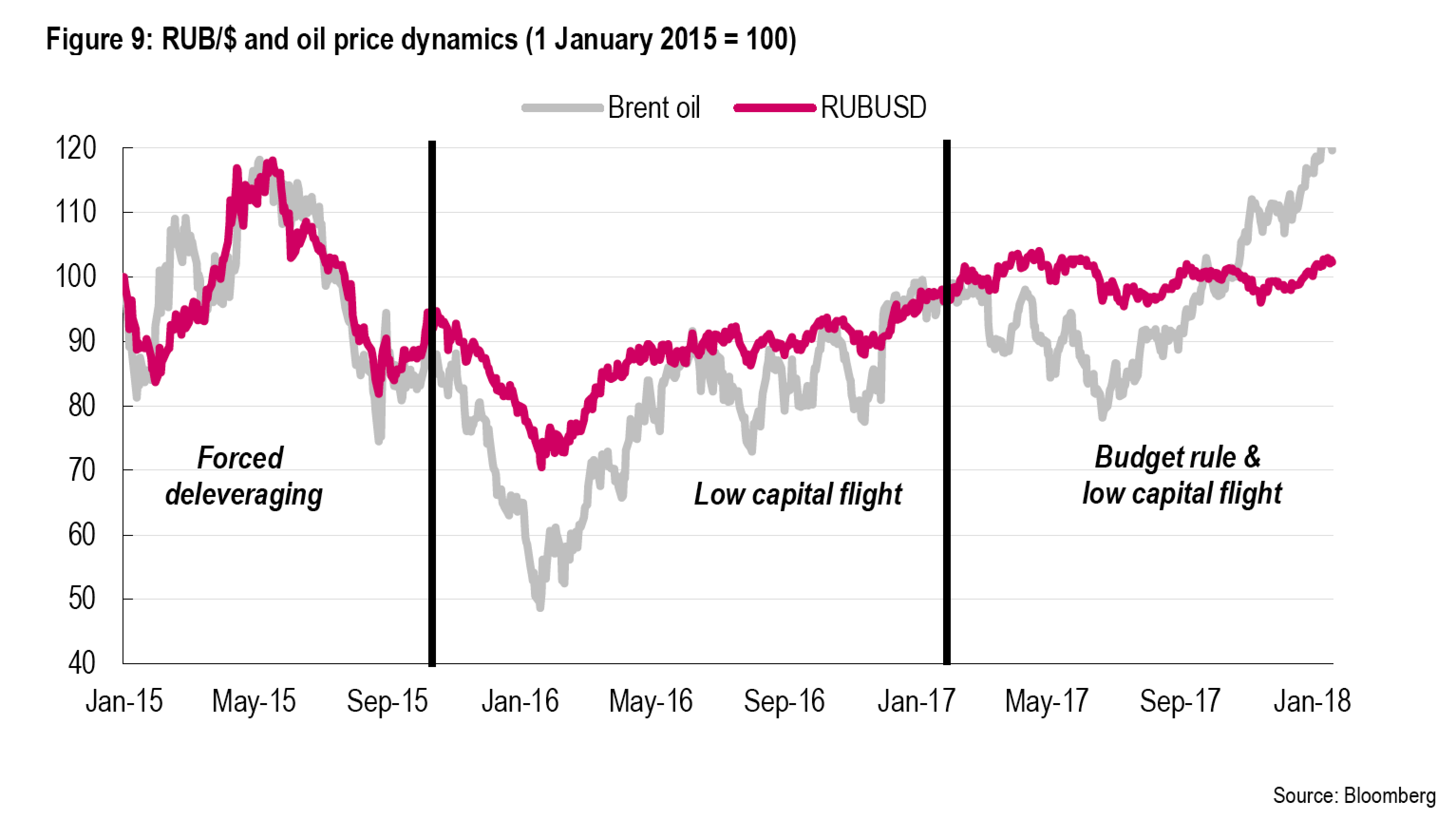