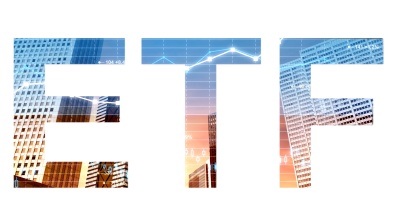 2019 turned out to be one of the best performing years for stocks in the last decade. Several of the leading ETFs outperformed the RTS and returned more than 50% to investors
By Ben Aris in Berlin January 12, 2020

Russia’s RTS returned just under 45% in 2019 and all of the dozen exchange-traded funds (ETFs) that focus on Russia did well, with a few beating the index and returning more than 50% to investors in 2019.

And the market is off to a strong start in 2020. The RTS index broke through the 1,500 mark at the end of 2019 but in just the first two weeks of 2020 it passed another important milestone, breaking through the 1,600 mark for the first time in seven years.

The break down of sector performances in the first week suggests the so-called Santa Rally that started last autumn will continue into a spring rally that has returned 18% on average in the last decade in those years where there was no crisis.

The consumer stocks remain depressed on the back of stagnant real incomes. But that may change in 2020 as Russian President Vladimir Putin said in his December annual press conference that his top priority for 2020 was boost incomes to deal with the rising political unrest. Real incomes were improving through out 2019, mainly driven by the faster than expected fall in inflation. Economists say that much of the economic growth in 2019 was driven by a nascent recovery in consumption, although Russians were still financing the increase  in consumption using credit rather than from rising incomes.

Only one of the dozen ETFs that invest into Russia, surveyed by bne IntelliNews in “Shopping for Russian stocks with ETFs” in September 2019, actually tries to track the RTS: ITI Funds RTS Equity UCITS ETF (Ticker: RUSE) and did a good job, also ending the year up by 45.5%.

Several of the other funds track the MSCI Russia index, which was up by 36% in 2019, but several of these ETFs, which are mostly based in London, did even better.

The iShares MSCI Russia ADR/GDR UCITS EFT also tracks the MSCI and while it beat that index the 43.8% it returned was slightly less than the RTS’ gain.

Many of the other big funds simply hold a basket of the biggest and most liquid stocks. These funds are heavy with energy company names but after 20 years the Russian equity capital market has seen enough IPOs from other sectors that it is possible to build a more balance and diversified portfolio. But the market is not that big and as a result most this type of ETF has very similar names in their portfolio and consequently very similar results.

The biggest of the ETF with $1 assets under management (AUM) is the VanEck Vectors Russia ETF that is made of a basket of two dozen large liquid names and returned 36.2%, which was on a par with the other US-based ETFs focused on Russia. However, from the US-based ETFs the new kid on the block, the Franklin FTSE Russia ETF, did best and matched the RTS’ return by posting a 46.4% return for the year.

Finally East Capital Russia fund and the East Capital Eastern Europe fund that has a 40% exposure to Russia, also did very well. While these funds are not ETFs, East Capital is one of the oldest funds working on the Russian market after it set up at the start of 1998 and is easily accessible to retail investors. The other big Russia dedicated funds include Prosperity Capital Management (PCM), Firebird Management LLC and Baring Vostok, but are only accessible to professional investors.

East Capital’s funds had a stellar year in 2019 with the Russia fund almost matching the RTS gains, up 41.6%, while the broader East Capital Eastern Europe fund that also invests in the companies of Central Europe, also did well but returned slightly less, up 38.95% in the same period. But as the chart below shows the East Capital Russian fund has been performing well since the re-rating of the market began in 2016, when the first wave of retail stocks began to grow in value. That was the year when fears of new harsher sanctions began to fade and the least politicised stocks -- largely in the retail sector -- began to re-rate, most noticably with the supermarket chain X5 Retail group that saw its share price double. Since then the re-rating has spread to progressively more sectors, ending with the highly politicised sectors like oil and gas in 2019. The best performing liquid stock in 2019 was Gazprom which gained 76% in 2019 after management unexpectedly doubled its dividends. 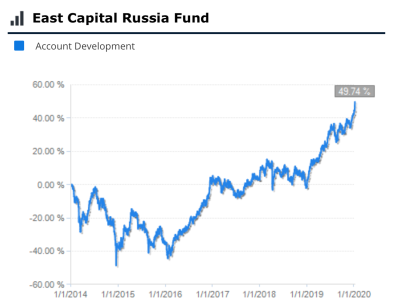 East Capital describes the Eastern European funds as: “East Capital Eastern Europe (registered in Luxembourg) invests in company shares throughout Eastern Europe… A significant proportion of the fund's assets are invested in larger and medium-sized companies. The fund also tries to get hold of attractive smaller companies. The Fund may invest up to 10% of its net asset value in a single issuer, with most holdings accounting for less than 5%. The fund has a low portfolio turnover. The investment style is based on a long-term perspective, fundamental analysis and active stock picking to combine growth with value.”

All the Russia dedicated funds did very well in the boom years and followed broadly the same strategy: although the Russian stock market is heavily weighed towards the natural resources extraction industries, all the leading funds also looked for listed companies with exposure to the growth of the emerging middle class. They rode the rise of companies like Russian state-owned retail bank Sberbank, supermarket chain Magnit and internet company Yandex.

Looking ahead to the rest of the year analysts are expected the RTS to return about 20% this year, baring surprises, and the market was off to a strong start with the RTS breaking through the 1,600 level on January 9 for the first time in seven years.

After the refusal of some EU members to start accession negotiations with Tirana because of the lack of required reforms, I travelled to Albania to see and hear for myself.

Russia's leading petrochemical plant Sibur saw revenues down in 2019, but profits up and plans on track for long term growth

Russia’s leading petrochemical producer won’t hold its highly anticipated IPO this year, or even next year, but despite tough market conditions this year the outlook for the company remains bright

The use of sanctions to pressure countries has become the go-to foreign policy tool but the economic repercussions are still not well understood and new sanctions on Russia by the US could backfire.

Albania takes one step forward, two steps back towards the EU
14 hours ago
Russia's leading petrochemical plant Sibur saw revenues down in 2019, but profits up and plans on track for long term growth
2 days ago
Market interventions: the case of the US sanctions on Russia
2 days ago
Renewed frontier – Georgia’s TBC Bank laying groundwork for move into Uzbekistan
5 days ago
TURKEY INSIGHT: Pure genius. With economy back on cliff-edge Erdogan’s MPs propose expanding credit guarantee fund
8 days ago