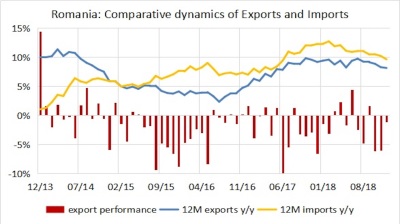 Measured in FOB/FOB terms, not including some costs related to imports (insurance, transport), the gap was only €11.7bn, but this was still triple the deficit in 2014 and more than 6.1% of GDP. Imports increased faster than exports for the fifth year in a row, driven by fiscal stimulus that surfaced in households’ superior incomes.

When it comes to shorter-term dynamics, the imports rose in line with the year’s average, namely by 9.6% y/y, in Q4, when exports advanced by only 5.1% y/y.

The state forecasting body CNSP expects exports to remain strong and keep rising at annual rates of over 8% per annum in 2019-2022. The economic slowdown in Europe might result in slower exports, while imports (seen by CNSP as rising by more than 9% per annum in 2019-2020) depend on the continuation of the fiscal stimulus. The exchange rate correction, if of significant magnitude, could heal the chronic external deficits that resulted in a Current Account gap that “can be financed, but is at [the upper] limit,” in the words of National Bank of Romania governor Mugur Isarescu, namely around or slightly over 4% of GDP.

Polish industrial production continues boom in December
11 hours ago
Slovenia’s economic sentiment indicator up 2.2 pp m/m in January
7 hours ago
National Bank of Ukraine retains a key policy rate at 6%, the outlook of the CPI deteriorates
2 days ago
Russia's National Welfare Fund accounts for almost 12% of GDP
3 days ago
Bosnia's exports in 2020 amounted to BAM10.5bn, trade deficit to BAM6.3bn
4 days ago