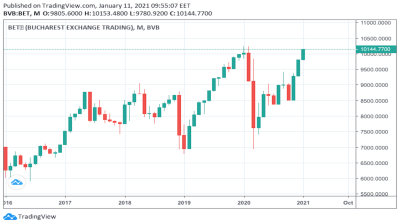 Performance of the man BET index over the last five years.
By Iulian Ernst in Bucharest January 11, 2021

The index is climbing up toward the pre-crisis high of just over 10,200 points reached in January and February 2020. Thus, the BET has topped 10,000 points again, a milestone it passed only a couple of times after the stock market shock of 2008, before the upward trend at the beginning of last year was abruptly interrupted by the COVID-19 pandemic.

The BET-TR total return index is already at an all-time high of 17,080 points

In the first trading week of the new year, the steepest increases were posted by Transelectrica (7.8%), OMV Petrom (7.3%) and Fondul Proprietatea (5%), while at the opposite end were Teraplast (0.7%), Digi Communications (unchanged) and MedLife (-1.8%).

In Bucharest there was no significant news about the listed companies. Like many other rallies on the BVB, the evolution of the index was largely determined by developments on foreign markets: a historical maximum of about 31,000 points for the Dow Jones, but also a record of 14,000 points for the DAX, the Frankfurt Stock Exchange Index.

"I think the big fears about the pandemic have passed and now investors are focusing more on risky assets (stocks). For now, there is nothing to indicate a trend other than the upward one, I only expect normal price corrections,” said Antonio Oroian, broker at the brokerage company Goldring, quoted by Ziarul Financiar daily.