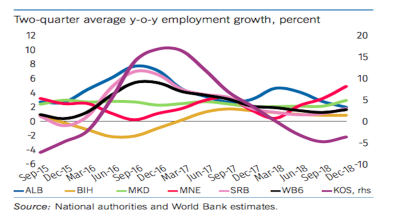 Although the economic growth of the Western Balkans is projected to remain robust at an average of 3.7% in 2019 and 2020, it is facing growing external and domestic risks, including geopolitical and trade disputes and a slower-than-expected pace of structural reforms, the World Bank said in its latest regular economic report on the region, Reform Momentum Needed, released on April 2.

In March, the World Bank released another report jointly with the Vienna Institute for International Economic Studies (wiiw), which said that the job creation has significantly slowed down in the region, which is raising some concerns.

“Policymakers in the region should look to implement reforms that can help generate a sustained growth momentum that spurs job creation,“ Linda Van Gelder, World Bank director for the Western Balkans, was quoted as saying in a press release on the report’s publication.

The Western Balkan countries should advance reforms to improve productivity, stimulate growth, and create jobs, according to the report.