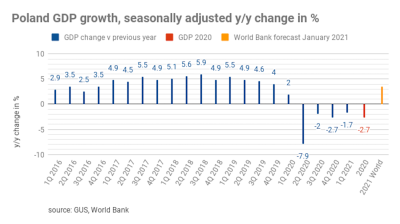 The actual performance of the economy in January-March is slightly below expectations.
By Wojciech Kosc in Warsaw May 17, 2021

Polish GDP fell a seasonally adjusted 1.7% y/y in the first quarter after retreating 2.8% y/y in the preceding three months, a flash estimate released by the Central Statistical Office (GUS) on May 14 showed.

The easing of the economic contraction in Q1 is yet another harbinger of Poland’s returning to growth this year. The actual performance of the economy in January-March is slightly below expectations, however, as hopes for an earlier recovery were dashed by the third wave of the COVID-19 (coronavirus) pandemic, which began rising fast in March.

Poland is about to reopen nearly in full this month in line with the vaccinations being rolled out to more and more people. Doubts do surface, however, about the total number of people willing to be inoculated being no more than 50% of Poland’s population – too little to ensure herd immunity. That might spell trouble again for the healthcare system and economic recovery after the end of the summer.

For now, optimism prevails. “With the authorities moving quickly to ease containment measures and the vaccine rollout gathering pace, we expect a strong and sustained recovery to take hold in the second half of the year,” Capital Economics said.

That said, the London-based analysts add, “Poland’s economy performed a little worse than most had expected in Q1 and the tightening of restrictions to curb a third wave of COVID-19 means that quarterly growth in Q2 is likely to be slower still.”

Looking forward, the question is now whether the recovery – better seen in the high-frequency data, such as consumer spending – is more the effect of the extremely low base from last year or has bearings of a sustained upward trend.

“We estimate that after the base effects and the effects of the pent-up demand wane in June, the upward trend in the economy will stabilize around 5%,” said Poland’s largest bank, the state-controlled PKO BP.

Erste expects growth of 4.2% in 2021, while Bank Millennium forecasts 4.4%, adding that is a conservative outlook now.

In unadjusted terms, Poland’s GDP contracted 1.2% y/y in Q1 versus a fall of 2.7% y/y In October-December, GUS data also showed. In quarterly terms, economic growth inched up an unadjusted 0.9% in January-March after falling 0.5% q/q in the fourth quarter.

In 2020, Poland's GDP declined 2.7% in one of the world's mildest coronavirus-driven recessions.

A detailed breakdown of the flash reading – together with a possible revision of the data – is scheduled for publication on May 31.