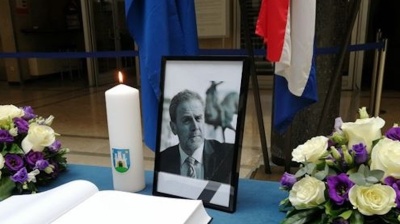 Zagreb’s long-serving mayor Milan Bandic died of a heart attack in the early hours of February 28, at the age of 66.

20 years after he first took office, Bandic, the world’s longest-serving city mayor according to reports in the Croatian media, was seen as virtually impossible for his political opponents to oust as mayor of the Croatian capital Zagreb. His death has political repercussions not only in Zagreb — which will hold local elections this spring — but for Croatian national politics too.

Bandic reportedly felt unwell late on February 27 and was taken to hospital, where he died the following day. Tributes have poured in from both colleagues and political rivals.

“He lived for his city, for the citizens of Zagreb who, in everything he was doing, came first, for a job that he was doing with love and energy, giving everything from himself, without a rest, for 21 years,” the municipality wrote on its website.

"I received with regret the news of the sudden and premature death of Milan Bandic, the longtime mayor of Zagreb,” said Prime Minister Andrej Plenkovic. “Mayor Bandic as a man and a politician was characterised by the inexhaustible energy for work and enthusiasm that marked his life and political engagement. He will be remembered for his efforts to do good for the people of Zagreb, but also for many other Croatian regions.”

President Zoran Milanovic issued a brief statement on Facebook, extending his sympathy to Bandic’s family on his “sudden and untimely death”.

Bandic was an influential member of the Social Democratic Party (formerly headed by Milanovic) until 2009, when he was kicked out for not backing Ivo Josipovic as the SDP presidential candidate and running as independent candidate instead. In 2005, he founded his own party, Bandic Milan 365 - Labour and Solidarity Party.

Although Bandic was very popular in Zagreb, he was also a controversial figure whose his name was involved in more than 250 corruption scandals.

Bandic first became mayor of Zagreb in 2000 but resigned two years later due to a drunk driving scandal. After drinking alcohol, he caused a car accident, hitting another vehicle. He was found to have three times the legal limit of alcohol in his blood.

But three years later, in 2005, Bandic returned as mayor of the city and has remained in the post ever since, without any serious competition for the job.

Among the many corruption scandals the late mayor was connected to were the granting of lucrative deals to his godparents, exchanges of city land that caused losses to the municipality and the suspected illegal construction of fountains in Zagreb.

In October 2014, Bandic was arrested along with several others on suspicion that he abused his position in relation to illegal activity at the Zagreb city administration and the city-owned company Zagreb Holding, which manages local services.

19 people were arrested for fraud in the case, known as the Agram affair, connected to the planned construction of a waste plant in Zagreb and to Bandic’s 2009-2010 presidential campaign. The Agram trial is still ongoing. Bandic spent six months in custody during the investigation.

Bandic was also tried in another alleged corruption affair, after being accused of granting a lucrative deal to his relatives, but acquitted in 2018.

The series of scandals made him such a controversial figure that ahead of the 2019-20 presidential election when Croatia’s then president Kolinda Grabar-Kitarovic sang "Happy birthday" to Bandic, and said she would bring him cakes in prison if he was convicted for corruption, the incident was seized upon by her opponents. Grabar-Kitarovic went on to lose the election to Milanovic.

On the other hand, Bandic’s time as Zagreb mayor was associated with numerous projects that contributed to the capital’s development and raised living standards for its citizens. These included the construction of several new suburbs and improvements to the city transport network, as well as less tangible changes that saw Zagreb become a more cosmopolitan city.

After the earthquake that struck Zagreb a year ago — leaving the Croatian capital struggling with the twin crises of the coronavirus pandemic and the widespread damage caused by the quake — Bandic worked closely with the national government on the reconstruction of the city, a long-term project that remains in progress.

His death came ahead of the Zagreb mayoral election this spring (the date has yet to be set), in which 11 rival candidates had been declared as well as Bandic, who had announced he would run for a seventh term. There was speculation that both Croatia’s main parties had deliberately put up weak candidates as it suited them to keep Bandic as Zagreb mayor. Following his death on Sunday, the long-standing status quo in the city has been shattered, leaving the upcoming race wide open.