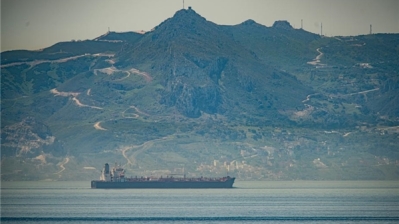 Iranian oil/chemicals tanker FORTUNE seen off the coast of Venezuela.
By bne IntelIiNews May 25, 2020

An Iranian tanker carrying fuel to help address Venezuela’s severe gasoline shortage has reportedly reached its destination without any interference from the US. Four more fuel-laden tankers were still en route to the South American country on May 25.

Anxiety as to the fate of the vessels arose after Washington said earlier in May that it was considering "measures" that it could take in response to the shipments. The sight of two adversaries heavily sanctioned by the US assisting each other—Venezuela gets the fuel to ease one aspect of its economic crisis, while Iran earns revenue, paid in gold bars if US officials are correct, to balance out some losses caused by the Trump administration’s efforts to entirely drive exports of Iranian oil off world markets—is not something the White House wants to see, but there is nothing illegal about it as any nation is quite entitled to choose to ignore unilateral American sanctions and suffer the consequences, such as more sanctions.

Iran's English-language Press TV reported on May 25 that the first of the five tankers had moored at El Palito, a Venezuelan port run by state oil company PDVSA. Ship-tracking service MarineTraffic confirmed the arrival.

A second vessel, the Forest, entered the Caribbean Sea on May 23. The three other tankers were currently in the Atlantic.

A Venezuelan navy ship and helicopter escorting the Fortune into Venezuela's territorial waters, along with footage of officials celebrating its arrival, was shown by Venezuelan TV. The country’s President Nicolas Maduro praised the solidarity and cooperation between his country and Iran. "Venezuela and Iran want peace and have the right to freely trade in the world's seas and exchange products," Maduro said on state television.

US Navy destroyers and other combat ships were lately sent to patrol the Caribbean on what American officials described as a counternarcotics mission. Maduro, Oil Minister Tareck El Aissami and other Venezuelan officials have been named by the US as narco-traffickers and wanted men.

US sanctions are partly responsible for the crippled state of Venezuela's refining industry, with Caracas finding it tough to source spare parts. Venezuela has the world’s largest oil reserves and was once Latin America’s biggest oil producer.

Tanker tracking services have estimated that the five tankers are carrying at least 1.53mn barrels of gasoline and chemical additives worth $45.5mn.

"This is a sad reminder of Maduro's hopeless mismanagement," US State Department spokeswoman Morgan Ortagus said of the Iranian tanker shipments. "Venezuelans need free and fair presidential elections leading to democracy and economic recovery, not Maduro's expensive deals with another pariah state."