President Vladimir Putin has sent tremors through global grain markets with increasing steps to reduce Russian wheat exports and boost “food security” – even though this will likely put Russian farmers out of business as they struggle to turn a profit.

“We need to fill our market with the products of our own domestic producers, and it should be done quickly in order to ease pressure on the food market, decrease prices,” Putin said in recent televised remarks.

To slow the double-digit climb in consumer prices triggered by the ruble’s collapse in December, the government sought to temporarily limit wheat sales overseas. From February 1, shipments incurred a 15% tax, plus another $8 a tonne. Although the levy is due to expire in June, two months before the EU food ban is reviewed, the government has signalled that an extension is likely.

Russia was the world’s fourth-largest wheat exporter last year, but since February exports dropped by more than half, and the loss of income is hurting already marginal profits for growers.

“Farmers in the south have huge stockpiles that the market will not have demand for,” Alexander Korbut, vice president of the Russian Grain Union, told Bloomberg.

Moreover, if the tax is lifted, world prices may fall as farmers dump crops on the market, Korbut added. Wheat on the Chicago Board of Trade, the global benchmark, had dropped 15% to $5.01 a bushel on April 23.

The Russian move contrasts sharply with neighbouring Ukraine’s agricultural exports policy, but farmers in both countries are struggling to get desperately needed credits, a factor which is likely to see a further drop in Russia’s key lending rate from the current 14% when central bank chiefs meet on April 30.

New man at the top – billions rotting at the bottom

Heralding an anticipated shake-up in Russia’s agriculture, Putin on April 22 appointed Alexander Tkachyov, governor of the grain-producing region of Krasnodar, to head the ministry in place of lawyer Nikolai Fyodorov, who held the post since 2012.

Tkachyov’s main task will reportedly be to reorganize the domestic agricultural industry - worth about 4% of Russia’s GDP – to take advantage of the exclusion of most Western imports – an opportunity his predecessor’s critics say was crucially neglected in recent months.

While many large Russian producers have seen profits soar as food prices rise, few have sought to make long-term investments or increase production.

There are signs that the government will finally act to help redress this, including with extra financing for the sector. The State Duma lower house of parliament voted on April 10 to cut the federal budget for the first time in 17 years by an average of 10% across the board. While previously untouchable areas like defence were also trimmed, some got a modest additional boost reflecting new priorities. As well as the planned RUB203bn ($3.86bn), agriculture this year will get an additional RUB20bn from the Reserve Fund to follow the new course on imports substitution.

It happens not a moment too soon for producers battling not just retail issues but also dilapidated equipment. Russia’s agricultural sector is losing up to 20mn tonnes of grain a year because of its deteriorating technical base, the head of the national union of grain producers Pavel Skurikhin said in March.

Lack of serviceable machinery and adequate drying and storage facilities will this year cost agriculture a staggering RUB220bn ($3.67bn at the March rate) in lost grain, Skurikhin told the union’s annual congress in Moscow. The waste dwarfs planned federal equipment subsidies of RUB75bn, he said, describing the sector's current technical state as “catastrophic”.

Each year around 10% of Russia’s sowing and harvesting machinery breaks down, leaving producers unable to process the grain yield before it spoils. Climatic conditions by comparison accounted for only a small percentage of overall grain losses, said Skurikhin, welcoming ministry plans to increase subsidies for acquisition of new equipment from 15% to 25%. But the broader sector still had poor access to credit facilities and soaring interest rates put loans out of reach for most holdings, he stressed. Russian agricultural concerns are currently in credit debt by some RUB2 trillion.

One man who will certainly clamour for a piece of any new state assistance is John Kopiski, a British-born former coal and steel trader who settled in Russia in 1992 and became a Russian citizen and dairy farmer.

During Putin’s televised Q&A session on April 16, the 65-year-old Kopiski, with white Tolstoy beard and green Paisley shirt, suggested Putin’s subordinates might be passing the president skewed statistics that do not correctly reflect the hardships now shutting down holdings like his.

“I feel bankruptcy getting closer every day… You have the statistics and it might seem OK but I’m sorry to say – it is not so,” said Kopiski, who became something of an industry celebrity in recent years, known as “Farmer John”, before shooting to national prominence after his recent encounter with Putin.

“I have 1,700 milk cows that each gives 10,000 litres of milk per year… I’m forced to sell them now because the cost price is higher than retail. I cannot expand my business because I’m not making profit after doing this for 15 years… Banks ask for 120%, sometimes 200% collateral on a loan,” Kopiski told Putin in Russian. Like the grain producer Skurikhin, he also underscored the acute lack of affordable credit for farming enterprises. Putin responded by saying the government will now increase support and subsidies for producers.

The Russian Orthodox Church convert was lucky enough to be invited by organisers to air his grievances at the ‘Direct Line’ session, an annual event in which Putin fields questions from the public on virtually any topic. However, other small holders far from Moscow’s bright lights have resorted to more drastic, direct means of venting their outrage at exorbitant lending rates.

In March, a court in the Siberian city of Novosibirsk fined a local farmer the ruble equivalent of $188 for emptying a cart full of manure in front of a Sberbank branch office in protest at its credit policy.

Alexander Baksheyev, who stuck gallows-shaped placards reading "Bankers are the people's enemies" and "Down with credit slavery" into the dung heap, was found guilty of violating rules on organising demonstrations. His assistant, who drove the dung to the bank's premises in his tractor, was fined $94. 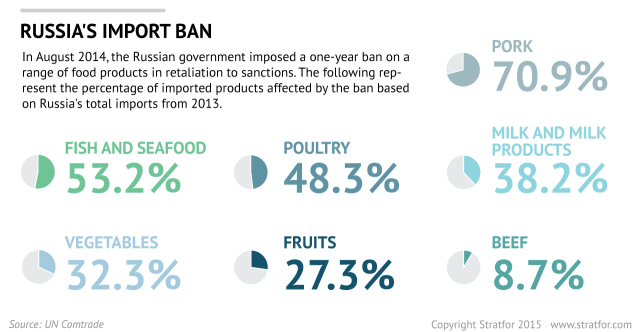