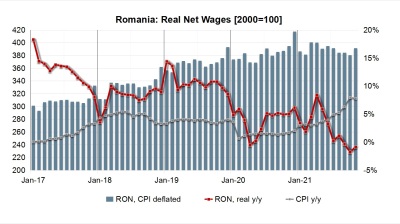 The advance, even if it seems to reflect volatile elements in November, is likely to further be encouraged by the rising inflation that has eroded households’ real incomes.

In real terms, the average net wage in November was 0.9% smaller than it was in the same month of 2020. It was the third month in a  row when the net wage posted a negative real annual change.

The deterioration was prompted by the sharp rise in consumer prices, as the headline inflation doubled from 3.9% y/y in June to 7.8%-7.9% y/y in October-November.

The volatile activity in some industries will generate more ample variations in the employees’ incomes from a month to another until the production chains return to the pre-crisis smooth functioning.

In November, for instance, the wages in automobile production increased by 19% m/m after subdued activity (hence wages) in the previous months.

Overall, however, the pressures for pushing up the nominal wages in order to keep pace with the inflation and energy bills is likely to tighten.

Consumers’ weaker confidence has already surfaced in the retail sales figures: the seasonally adjusted sales of non-food items contracted by 5% from April to November.

Austria, Croatia and Serbia were the top sources of foreign direct investment in Bosnia in 2021.

Russian inflation falls again to 14.9% in August, fears of a deflationary spiral grow
6 hours ago
FDI in Bosnia rose by 35% y/y in 2021
9 hours ago
Latvian unemployment rate at 6.6% in 2Q
1 day ago
Polish economy in much sharper downturn than expected, Q2 GDP data show
1 day ago
Russia’s EconMin seen as overly optimistic with another GDP upgrade
1 day ago