Navalny out of coma and off ventilator, says he wants to go home 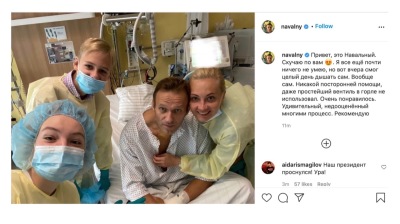 “Hello, it’s Navalny. Miss you all. I still can’t do most things, but I spent the previous day breathing on my own. Completely on my own..." Navalny said in a post
By bne IntelliNews September 15, 2020

Russia’s anti-corruption blogger and opposition activist Alexei Navalny is out of his coma, off the ventilator and said on September 14 that he wants to go home to Russia in his first post on social media since he was poisoned with Novichok earlier this month.

“Hello, it’s Navalny. Miss you all. I still can’t do most things, but I spent the previous day breathing on my own. Completely on my own... Really enjoyed it. What a wonderful and under-appreciated process. Recommended,” Navalny posted on his Instagram page surrounded by his family in the Charité hospital in Berlin where he has been treated.

Navalny was allegedly poisoned with the deadly nerve agent while in Tomsk and fell ill on the flight home to Moscow, which was forced to make an emergency landing in Omsk, where he was treated by local doctors before being flown to Germany on an ambulance plane.

He emerged from a coma a few days ago and has been talking and walking. He said that he wants to go home to Russia and carry on his work there.

German officials who investigated the case say there is “unequivocal proof” he was poisoned by a type of Novichok nerve agent that was also used in the attempted killing of the ex-spy Sergei Skripal in the UK two years ago.

The subsequent row has brought Russia-German relations to a new low as accusations fly backwards and forwards. The Russian side is insisting that tests carried in Omsk show no signs of a poison, whereas the German results were verified by labs in France and Sweden this week.

The allegations of what is officially classed as a chemical weapons attack by a banned substance means the Organization for the Prohibition of Chemical Weapons (OPCW) has been brought in to oversee the investigation. In the case of an illegal chemical weapons attack national jurisdictions do not apply, as Russia is a signatory to the anti-chemical treaties and official says it has destroyed its entire stock of Novichok, which was developed in the Soviet Union in the '70s and '80s.

The Kremlin has yet to launch a criminal investigation into the affair as it complains that the Germans have not shared their data. However, Germany has been following the OPCW protocols. The verification of the use of Novichok by France and Sweden are part of those protocols and as Russia is a member of the OPCW it is at liberty to apply to the body for access to the data.

It remains unclear who was behind the attack on Navalny, but after it was revealed that the Novichok was of a new type not seen before and extremely deadly the likelihood that it was ordered by someone in the Kremlin has increased, although no evidence is available.

“The use of a Novichok-type agent in the recent attack essentially precludes this from being simply a threat (it is too difficult to guarantee a dose would hurt but not kill), and the recent claim by the German authorities that it was a hitherto unknown, slower-acting but more dangerous variety makes it almost impossible that this was not done without direct access to one of the Russian security agencies’ poison laboratories. And that, in turn, makes it less likely that this might have been done by one of the big beasts of the system rather than at the Kremlin’s direct behest,” Mark Galeotti, director of the consultancy Mayak Intelligence and also an honorary professor at UCL School of Slavonic & East European Studies, said in a recent comment for bne IntelliNews .

Confusion reigns over what exactly happened in Omsk. Initially the doctors were friendly and co-operative with the Navalny team that arrived with him at the hospital. But after a few hours their attitude changed and they became difficult and distant. Then several men in suits turned up and took over the head doctor’s office; these were accused of being members of the Federal Security Service (FSB) or the State Investigations Committee, according to Navalny’s press secretary.

An investigation by Reuters confirmed that the doctors gave Navalny atropine, a drug that counters the effects of Novichok and which medical experts say probably saved Navalny’s life. However, Alexander Sabaev, chief toxicologist of Omsk’s Emergency Hospital No. 1, continues to insist that Navalny collapsed because of an imbalance in his blood sugar levels. Reuters interviewed several doctors that treated Navalny when he first arrived and they claim that his blood sugar level was normal, as a check for a diabetic attack is standard procedure.

Russian App to make sure your hands are clean
MITTELEUROPEAN INSIGHTS: Better $1.5bn from Russia or €1bn from the EU in the hand than $15-20bn in the bush?
Russian online giant Yandex mulls financial ecosystem investments