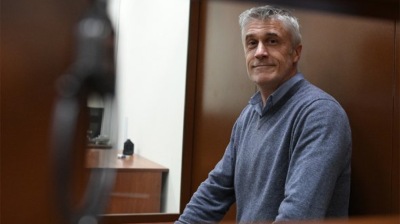 US investor Michael Calvey and the founder of Baring Vostok was convicted of embezzlement in a case that was engineered by a former business partner and given a 5.5-year suspended sentence last August.
By bne IntelliNews January 21, 2022

The best known fund in Russia, Baring Vostok brought billions of dollars into Russia from international investors with a string of hugely successful investments. Calvey was arrested in February 2019 after getting into a dispute with his co-investor into Vostochny bank, who used his connections with Russia’s security services to get a corruption investigation launched.

Calvey was briefly jailed during the early stages of the investigation, but was later released to house arrest after the case hit the headlines and proved a major embarrassment to the Kremlin. Calvey is well known and well liked by the Moscow based investment community and several senior Russian officials publically vouched for Calvey, who has a spotless record for ethical investments.

A Moscow court sentenced Calvey to a 5.5-year suspended sentence for embezzlement on August 8 last year, a day after finding him guilty, in a closely watched trial that hurt Russia’s investment image.

The case was widely seen as engineered by Artem Avetisyan, who was a co-investor and has close ties to the Kremlin and the Federal Security Service (FSB). During the course of the trial even the judge admitted that no real evidence of Calvey’s guilt was presented and claimed the lack of evidence was “proof of how good they are in covering up their wrongdoing.”

"The court, unfortunately, didn't or couldn't understand [the] substance of the case with no victim, no damage and no beneficiary," Calvey told reporters outside the court after receiving his conviction.

Since that result restrictions on Calvey movements have remained in place, including a ban on leaving the country, which have largely been lifted now.

"The Judicial Board satisfied the cassation appeal of the defence and cancelled the measure of restraint in the form of a ban on certain actions," the court’s press service said as cited by Ria Novosti.

The press service clarified that if the punishment is not connected with actual deprivation of liberty, then there is no need for a measure of restraint restricting freedom of movement.

"Before the guilty verdict enters into legal force, restrictions cannot be imposed on the suspect, the accused, in their totality comparable to a criminal punishment, and even more so exceeding it," the court said.

The courts previously ruled that Calvey was forbidden to leave the house after 20.00, communicate with witnesses outside the framework of the case, or visit the buildings of the Vostochny Bank or the First Collection Bureau, another bank that named in the case against him.

In early August, the Meshchansky Court of Moscow found Calvey and all his co-workers at the fund guilty of the embezzlement of RUB2.5bn ($32.6mn) and gave all of them suspended sentences.