“Russia is the last major emerging market without a dominant online retailer. Russia is at an inflection point,” believe the Morgan Stanley analysts, who bet on the emergence of “a leader being worth $10bn” by 2020.

The report underlines the high penetration rates of the Internet (80%) and smartphones (66%) in Russia, in contrast with a mere 3% e-commerce share in total retail.

Besides, “there is a clear link between the number of years spent online and the willingness to transact online,” note the analysts, who “believe Russia [is] reaching a critical mass of ‘mature’ Internet users, which is driving a rise in the number of transactions online as users become more accustomed to them.”

The report sees other growth drivers in the supply side. E-commerce projects have received significant funding over the past years from both private and public backers, and the trend should continue. 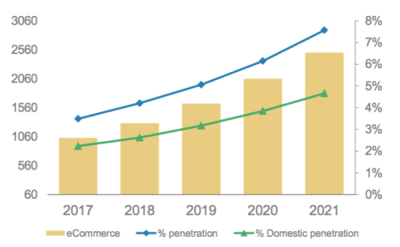 The Russian e-commerce market could develop according to a Chinese scenario. “Just like in China, we think the following is required for an e-commerce market leader in Russia to thrive: 1) develop a marketplace model, 2) invest in logistics, and 3) provide financial support for merchants,” write the authors.

“While in China, retailers are moving from a marketplace model (which brings together third party sellers) to holding inventory directly (1st party), we believe Russia will evolve from a 1st party model into a pure marketplace, or at least a marketplace that controls more of the logistics channel.”

Thus, “there is scope for partnerships in Russia with domestic offline retailers due to the infrastructure challenges, although it remains unclear how feasible these are. Thus cannibalisation remains a key risk for offline retailers,” Morgan Stanley concludes.

The report justly underlines the rise of two players aiming for leadership, Yandex and Mail.Ru Group. The former has teamed up with Sberbank to create a huge e-commerce platform called Yandex.Market, as reported last year by East-West Digital News. Dubbed ‘Beru’ and currently in its beta version, this marketplace draws some of its inspiration from the Amazon model.

Sberbank, the country’s leading financial institution, is committed to invest as much as $500mn in the joint venture.

Sberbank’s huge client base (70% of the Russian population), its 14,000 branches across the country, as well as Yandex.Market’s audience (20mn Internet users and 11mn mobile app users per day, respectively) are strong assets for the project to succeed.

The Morgan Stanley analysts even see in Yandex.Taxi’s 400mn drivers (following the merger with Uber Russia) as many potential e-commerce delivery agents.

After the refusal of some EU members to start accession negotiations with Tirana because of the lack of required reforms, I travelled to Albania to see and hear for myself.

Russia's leading petrochemical plant Sibur saw revenues down in 2019, but profits up and plans on track for long term growth

Russia’s leading petrochemical producer won’t hold its highly anticipated IPO this year, or even next year, but despite tough market conditions this year the outlook for the company remains bright

The use of sanctions to pressure countries has become the go-to foreign policy tool but the economic repercussions are still not well understood and new sanctions on Russia by the US could backfire.

Albania takes one step forward, two steps back towards the EU
13 hours ago
Russia's leading petrochemical plant Sibur saw revenues down in 2019, but profits up and plans on track for long term growth
2 days ago
Market interventions: the case of the US sanctions on Russia
2 days ago
Renewed frontier – Georgia’s TBC Bank laying groundwork for move into Uzbekistan
5 days ago
TURKEY INSIGHT: Pure genius. With economy back on cliff-edge Erdogan’s MPs propose expanding credit guarantee fund
8 days ago