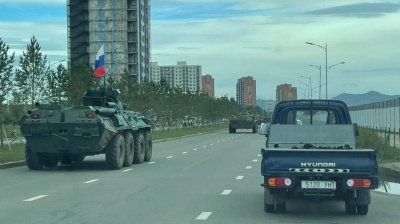 Mongolia is to host more than 1,000 Russian military personnel for a joint field military exercise called Selenge-2022, but formerly known as Darkhan 1 and 2. The drill will be held from August 1 to 15 in southwestern Khovd province.

The Russian armed forces have brought around 300 military vehicles to Mongolia. Pictures and videos of some of the vehicles travelling through the streets of Ulaanbaatar have been circulating on social media, with some of those making the posts apparently assuming Russia has arrived to take over Mongolia. In this regard, Mongolia’s Defence Ministry informed the public that the vehicles were en route to Khovd province for the military exercise.

The very public circulation of Russian troops in Mongolia is presumably intended to demonstrate Russia's commitment to Mongolia's defence. But given Russia's ongoing war in Ukraine, such a perception has long been replaced by different perspectives by Mongolians who might have cheered the Russians before their invasion of Ukraine.

Mongolian Minister of Foreign Affairs Battsetseg Batmunkh provided more information on why Mongolians were witnessing the arrival of Russian troops, saying: "Mongolia cooperates with many countries to improve in the field of defence. Recently, the joint military exercise King's Quest was held with the United States. The field exercise Selenge of the armed forces of Russia and Mongolia is held every year also. This is just one of many scheduled, planned and agreed upon events that we conduct with multiple different nations.”

She continued: “For the military vehicles, it is a tradition to bring equipment from Russia for the training and as soon as the training is over it is taken back and doesn’t stay in Mongolia."

According to Russian news agency TASS, the Russian-Mongolian joint military exercise might form part of Russia’s International Army Games (ArMI-2022), also known as the Military Rally competition, that will be held across 12 countries simultaneously.  The Games will take place from August 13 to August 27.

TASS also stated that the Military Rally armed forces competition would be held for the first time on the territory of Russia and Mongolia simultaneously. However, Ulaanbaatar has not as yet clarified to the public if the joint military exercise is part of Russia’s Army Games or a prelude to it.

Former Mongolian PM Bayar Sanj chastised his own party on Twitter for failing to be transparent about the joint military exercise. Hitting out at the Mongolian People's Party (MPP), he said: "Russian military vehicles have entered Mongolia. Photos of the vehicles circulating state they are heading to the outskirts of Khovd for military training. Is it true or false? If this is true, the government must inform the public about the training's goal and the line of thinking. Our People's Party and administration are respected when they are upfront and straightforward with the public."

Unlike Kazakhstan’s leaders, who have pushed back on revanchist, nationalist Russians' claims to territory in their country and have refused to acknowledge the Moscow-backed breakaway territories of Ukraine, Mongolia has come across as very accommodating to the Kremlin since the invasion of Ukraine began. With the conflict in Ukraine raging, Ulaanbaatar has fast-tracked Russia's Power of Siberia 2 gas pipeline project needs in Mongolia and, critics say, has shown an unwillingness to acknowlege Russian aggression in Ukraine.
Read in IntelliNews Pro
Get IntelliNews Pro