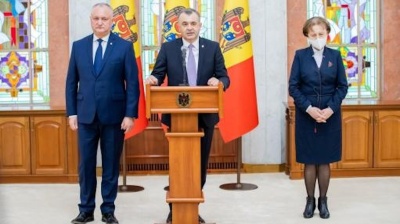 Moldova’s Prime Minister Ion Chicu resigned in the morning of December 23, a couple of hours before the vote on the no-confidence motion filed in parliament by the pro-EU Action and Solidarity party (PAS) led by President Maia Sandu.

Chicu said that he resigned to pave the way for early elections. He said that he would consult with Sandu, who took the oath of office on December 24, on whether he would serve as acting prime minister.

Dodon said that the responsibility for initiating negotiations aimed at leading to dissolving the parliament belongs to Sandu.

After her election as president, Sandu said that she and her party would push for early elections in order to have a parliament that better reflected the will of the people, as expressed in the presidential election. Sandu has an extensive reform agenda that includes putting Moldova back to the path to EU integration, but what she can achieve is limited without an ally as prime minister.

Chicu took over as prime minister in November 2019, when he replaced Sandu, who had been dismissed by Dodon’s Socialists through a no-confidence motion after less than half a year in office.

In November 2020, however, Sandu defeated the pro-Russian incumbent president Igor Dodon in the second round of the presidential elections. Dodon’s Socialists control a fragile majority in parliament, helped by the MPs controlled by fugitive businessman Ilan Shor and oligarch Vlad Plahotniuc.

The day before they resigned, Chicu and his cabinet endorsed a list of decrees, just as the majority in parliament had previously endorsed several controversial draft laws. Among others, the parliament scrapped the “billion dollar” law regarding the repayment of the so-called $1bn bank frauds from public funds. Some of them, including the law on the bank frauds’ repayment, have already been suspended by the Constitutional Court.

Russia's Sberbank makes a move in e-commerce with Goods.ru deal
1 hour ago
Protests sweep Poland after government launches near-total abortion ban
7 hours ago
Putin strikes a conciliatory tone in his World Economic Forum speech but warns of an “all against all” fight if tensions are ignored
7 hours ago
Hungarian government plans to regulate big tech to stop 'ban' on rightwing views
8 hours ago
China to be excluded from Czech tender for new Dukovany nuclear unit
8 hours ago