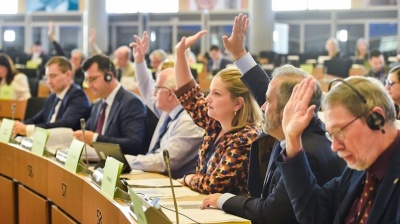 The European Parliament’s Committee on Foreign Affairs (AFET) on June 14 urged the EU members that have not recognised Kosovo so far to do so.

Kosovo declared independence from Serbia in 2008 but it is still not recognised by Belgrade as well as by five EU members as a separate country. Russia and China also do not recognise Kosovo's independence.

“Welcoming Kosovo’s alignment with the EU on sanctions against Russia and its strong solidarity expressed with Ukraine, MEPs also stress that the independence of Kosovo is irreversible and call on the EU countries that have not yet recognised Kosovo to do so immediately,” said a report on Kosovo adopted by the AFET.

The committee also endorsed reports on Serbia and Bosnia & Herzegovina.

MEPs commended Kosovo’s increased political stability and strong commitment to its EU path and reiterated their call on member states to proceed urgently with adopting a visa-free regime for citizens of Kosovo.

MEP stated that “any further delays undermine the EU’s credibility and reputation as a reliable partner”.

The report reconfirmed unequivocal support for the EU-facilitated Belgrade-Pristina dialogue and reiterated the importance of achieving a comprehensive, legally binding normalisation agreement.

The agreement is “crucial for both countries to advance on their respective European paths and which will contribute to regional stability and prosperity,” it stated.

The report on Serbia welcomed the fact that EU membership continues to be Serbia’s strategic goal, while regretting the lack of progress and even backsliding on issues that are fundamental for EU accession.

Praising the return to a more pluralistic parliament following the April elections in Serbia, MEP called for progress on the rule of law, fundamental rights, freedom of expression, strengthening media pluralism and normalisation of relations with Kosovo.

The report strongly regrets that Serbia has not aligned with EU sanctions following Russia’s invasion of Ukraine and calls on the newly elected authorities to urgently align with the EU’s decisions against Russia.

MEPs expressed concern about the spread of disinformation and called on the Serbian authorities and the European Commission to fight disinformation, Russian propaganda and other hybrid threats in the Western Balkans.

Regarding Bosnia, MEPs reconfirmed their support for the country’s Euro-Atlantic orientation, but strongly denounced hate rhetoric and disruptive action, including the withdrawal from and obstruction of state institutions, notably by the leadership of Republika Srpska.

MEPs also stressed the importance of holding general elections in Bosnia in 2022 as scheduled, as well as implementing the results.

In light of Russia’s war of aggression against Ukraine, MEPs also call on Bosnia to implement the EU sanctions the country has aligned with and warn of Russia’s continuing interest in destabilising the country.

The reports should be submitted to a vote in the European Parliament as a whole at the plenary session in July.