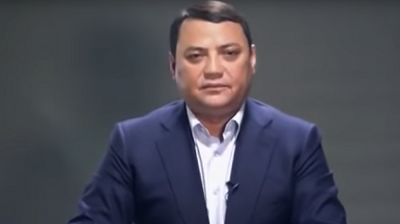 Critics have said the legislation was hastily prepared by lawmakers to avoid a conviction for former deputy chief of the Customs Service, Raimbek Matraimov. / Screenshot, youtube.
By bne IntelIiNews January 4, 2021

Kyrgyz MPs have approved an economic amnesty bill that allows individuals who obtained financial assets through illegal means to avoid prosecution by surrendering the assets to the State Treasury.

The move will do nothing to allay concerns that organised crime is posing a growing threat to democracy in Kyrgyzstan—the fears were voiced by the US embassy in Bishkek last October amid the upheaval that led to the fall of the Sooranbai Jeenbekov administration and the rise to power of fervent nationalist Sadyr Japarov, who was freed from jail by supporters during the turmoil that followed a parliamentary election that losing opposition parties decried as fixed.

Economy Minister Bekbolot Aliev said on December 23 that the amnesty's prime objective was not to generate revenues for the government but "to bring the shadow economy to the legal scene", RFE/RL reported.

Kyrgyz authorities have reportedly said that the bill may affect around 1,300 individuals convicted or suspected of enriching themselves through tax evasion, financial fraud, smuggling, and other economic misdeeds.

Critics, however, say the legislation was proposed and hastily prepared by lawmakers to avoid a conviction for the former deputy chief of the Customs Service, Raimbek Matraimov. He has been implicated in a high-profile case involving the illegal funnelling of hundreds of millions of dollars abroad.

The idea for an economic amnesty was announced on October 21 by Japarov, then acting Kyrgyz president, just a day after Matraimov was detained and placed under house arrest.

The State Committee for National Security (UKMK) said at the time that Matraimov had agreed to pay about Kyrgyzstani som (KGS) 2bn ($24.7mn) in damages to the state, and that KGS80mn had already been transferred to its account.

Matraimov is one of three brothers from what is rumoured to be one of the wealthiest and most-powerful families in Kyrgyzstan. He was a key financial backer for political parties and presidents, including Jeenbekov and the Mekenim Kyrgyzstan party. The party dominated the October 4 parliamentary elections along with a party called Birimdik, which listed Jeenbekov's brother among its ranks.

Angered by apparent vote-buying, protesters seized government buildings after the election results were announced, prompting officials to annul the election and Jeenbekov to step down.

Japarov, a former nationalist lawmaker and convicted kidnapper who was freed from prison when a mob stormed a Bishkek prison during the protests, was elected prime minister by parliament and then had the presidential powers transferred to him when Jeenbekov left office in mid-October.

Last year, a joint investigation by RFE/RL's Kyrgyz Service, the Organized Crime and Corruption Reporting Project (OCCRP) and the Kyrgyz news site Kloop implicated Matraimov in a corruption scheme involving the transfer of funds out of the country by Chinese-born Uyghur businessman Aierken Saimaiti, who was assassinated in Istanbul in November 2019.

Japarov suspended his duties as acting president and prime minister in mid-November. He did so to make himself eligible to take part in an early presidential election scheduled for January 10.