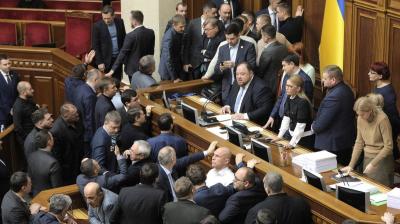 Ukraine has signed off on a new Standby Agreement with the IMF that contains a list of very detailed instructions on what the government cannot do
By Ben Aris in Berlin June 14, 2020

The new International Monetary Fund (IMF) Standby agreement (SBA) that was finalised on June 9 comes with some very specific strings attached. Ukraine’s government has a terrible track record of sticking to its commitments and so the memo that accompanies the new SBA signed last week comes with some very specific conditions indeed, spelling out in detail what the government in Kyiv is not allowed to do under the terms of the new deal.

The most important conditions include a commitment to the independence of the National Bank of Ukraine (NBU) and no interference in the independent anti-corruption system set up at the IMF’s insistence.

“The IMF explicitly mention the independence of the NBU three times in the memo,” tweeted Anders Aslund, a Swedish economist and a Senior Fellow at the Atlantic Council. “The IMF statement goes on at length, but reading between the lines, the message to the Ukrainian government is clear: you may have fulfilled our conditions, but we still do not trust you.”

And the fears are well founded. Barely was the ink dry on the SBA deal when deputies associated with oligarch Ihor Kolomoisky launched a motion in the Supreme Court to punish the NBU for its “mishandling” of the crisis years.

Kolomoisky has mounted a campaign against the regulator as part of his efforts to retake control of PrivatBank and stop a series of lawsuits that may result in his losing his entire fortune. There have been verbal and physical attacks again both the bank and its staff. The NBU has branded the attacks as a “terror” campaign and named Kolomoisky as being responsible.

The independence of the NBU will become the new red-line issue for the IMF and Ukraine’s other donors. The attack on the NBU has come after Kolomoisky suffered a defeat when the Rada voted through the so-called anti-Kolomoisky banking law that makes it impossible for the regulator to return a bank to its former owners after nationalisation.

However, the bank law is also reportedly under attack, as there reports from Kyiv that Rada deputies are about to launch a challenge to the new bank law in the constitutional court.

All this runs against the commitments the government made in the new IMF deal, where the authorities in Ukraine promised to avoid taking actions that would imply political interference in the independence of the NBU, and specifically the NBU should continue to adhere to the inflation targeting policy under the exchange rate regime, with an emphasis on maintaining financial stability, according to the memorandum agreed from the IMF.

"The NBU will continue its flexible inflation targeting (IT) policy, within a floating exchange rate regime, and with a strong focus on maintaining financial stability. A credible flexible IT regime will better anchor inflation expectation, allowing the NBU to better smooth economic cycles and mitigate liquidity stress. We will ensure that this framework remains unchanged, including irrevocable inflation targets and principles of monetary policy," the document says.

"Our monetary and exchange rate policies and operations will remain consistent with our commitment to meet the programme's international reserve and inflation objectives, as well as ensuring sufficient liquidity. We intend to contain inflation within the NBU's target range of 5% +/-1 percentage point, while letting the exchange rate adjust in line with economic fundamentals and purchasing foreign exchange to meet the programme's reserve targets," it says.

NABU, SAPO ACC under the IMF protection too

In addition to singling out the NBU for special mention, the IMF memo also highlights a commitment by Kyiv to not interfere with the independent anti-corruption triumvirate, set up at the IMF’s insistence as one of the strings attached to previous loans.

The National Anti-Corruption Bureau of Ukraine (NABU) is the investigative part of a triumvirate that also includes the Special Anti-Corruption Prosecutor’s Office (SAPO), which carries out prosecutions in parallel with the General Prosecutor’s Office, but is also entirely independent from the government’s control. In December 2018 the anti-corruption court (ACC), an independent court tasked with hearing the cases investigated by NABU and prosecuted by SAPO, was set up despite vigorous resistance from the former President Petro Poroshenko administration.

As part of the same memo, the government has committed to preserve the autonomy of SAPO, NABU and the ACC. In addition, NABU will be provided with equipment for “communication interception” – eavesdropping technology to allow it to conduct anti-graft investigations.

In addition, there was an explicit limit on the government to prevent Rada’s ability to pass laws to expand its powers to dismiss the head of either SAPO or the NABU. There has already been talk of introducing new laws that give the parliament greater powers to dismiss the heads of these bodies and so bring them under the control of the government, thus eroding their independence.

"We will ensure the autonomy of SAPO. In this regard, we will review the legal framework to improve the procedures for selection of SAPO officials, strengthen its capacity to regulate its organisational activities similar to the regional prosecutorial offices, and assess its performance through an external audit of reputable and respectable experts with international experience in anti-corruption law enforcement," the document reads, as cited by Interfax Ukraine.

According to it, in terms of the work of NABU, Ukraine is obliged "to uphold NABU's institutional and operational independence, including by upholding procedures for appointment of its head and maintaining the limited and serious grounds for dismissal of its head."

"We will strengthen the investigative powers of NABU to use a wide range of investigative techniques, including undercover operations, intercepting communications, accessing computer systems," the document reads.

The memorandum emphasises that Ukraine is committed by end-July 2020 to providing "adequate resources and equipment to enable NABU to effectively and independently implement interception of communications for landlines by end-September 2020."

The memorandum also says that the conduct of an external audit of the NABU in accordance with the requirements set out in the NABU Law will be ensured.

As for the ACC, Ukraine in committed to providing adequate financial resources for its activities, including staffing and IT requirements and maintaining competitive staff remuneration.

President of Ukraine Volodymyr Zelenskiy signed a law that would allow NABU and the State Bureau of Investigations (SBI) an autonomous right to wiretap at the end of last year.

The Rada adopted this law on October 4. The document amends Article 263 of the Criminal Procedure Code, according to which the NABU and the SBI will be authorised to intercept information from transport telecommunication networks, which is actually the right to wiretap.

However, Zelenskiy’s government has already taken pot shots at the anti-corruption legal system, as the president is clearly seeking to expand his control over the security apparatus. The new Prosecutor General Iryna Venediktova accused SAPO of inefficiency in its prosecutors' performance. SAPO reacted to this statement with disagreement and asked for no interference with the work of anti-corruption bodies.