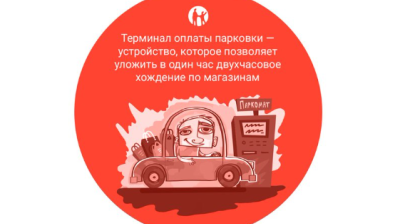 Kaspi advertising for an application that lets you pay for parking in one click.
By Kanat Shaku in Almaty October 23, 2020

Kaspi.kz’s wildly successful initial public offering (IPO) on October 16 has given a general boost to the global financial technology (fintech) and e-commerce sectors. Its global depository receipts (GDRs) rose as much as 33% on debut day, raising Kaspi’s valuation to $8.4bn from $6.5bn when its shares began trading. The GDRs closed 23% higher than the listing price on the same day at $41.50 on London Stock Exchange (LSE).

A month prior to Kaspi’s listing, Forbes Kazakhstan ranked the company first among the top e-commerce firms in Kazakhstan in 2020. The status was awarded within the TOP KZ Retail E-Commerce ranking compiled annually in collaboration with international consulting company Baker Tilly Kazakhstan and the Digital Association of Kazakhstan.

Earlier, Moody’s ratings agency published comments on Kaspi.kz’s primary business, Kaspi Bank.
“Kaspi Bank's Ba2 local and foreign currency deposit ratings are based on its Baseline Credit Assessment (BCA) of b1 and Moody's expectation of a high probability of support to the bank from the government of Kazakhstan (Baa3), which results in a two-notch uplift from Kaspi Bank's BCA,” Moody’s said. The high probability of support was likely the result of Kaspi Bank’s systemic importance in Kazakhstan.

“Kaspi Bank's BCA is underpinned by the demonstrated resilience of its business model and capital position through the cycle, the bank's strong profitability metrics and its granular funding base,” Moody’s added.

“Our Kaspi.kz Super App has now reached 8.5 million monthly users, further cementing its market leading position. Our e-Commerce platform, the largest e-commerce business in the country, is seamlessly integrated into our app and our team continues to work tirelessly to improve user experience,” Forbes Kazakhstan quoted Mikhail Lomtadze, CEO and co-founder of Kaspi.kz, as saying.

“We have expanded delivery to 54 cities and increased the range of products to almost 400,000.  For the first eight months of this year, our users made 2.6 million online purchases for almost 200 billion tenge [$467mn]. The amount of purchases grew 125%, the number of purchases by 150% compared to last year," he added.

In September, Yandex made a bombshell announcement. It said it intended to acquire Russia’s only pure online bank, Tinkoff Bank, for $5.5bn. The news caused both companies to gain over $2bn in value as their stocks rallied. Kaspi shareholders originally hoped the deal could set a benchmark for Kaspi’s valuation, according to a report by Reuters.

However, Yandex called off the deal on October 16. That has made Kaspi’s IPO the real benchmark-setter for fintech deals and IPOs amid the ongoing coronavirus pandemic restrictions and lockdowns.

Still, Yandex’s willingness to carry out such acquisitions reveals the potential for Yandex to eventually buy out companies like Kaspi.kz. As covered by bne IntelliNews, Yandex is venturing into the financial services terrain, stepping up competition with the Sber ecosystem of its former ally, state-controlled bank Sberbank. Thus, another large potential acquisition by Yandex in the fintech sector may well hove into view in the near future.

But who knows? Yandex, the most valuable tech company in all of Europe, started out without much competition in Russia, before becoming a dominant force in the region, and Kaspi.kz finds itself in a similar position in Kazakhstan. There is yet potential for Kaspi.kz to take on a similar leadership role in Central Asia and beyond as it plans to expand outside of Kazakhstan.

While the Kaspi listing is seen as positive for fintech in general, it is also obvious that Kaspi is riding a general global wave and just happened to be one of the early beneficiaries of that wave.

Hunger for tech IPOs amid coronavirus

The tech sector has generally benefited from the pandemic globally. Much of the growth seen in US stocks has been driven by technology stock prices.

It is not far-fetched to say that Kaspi’s valuation is a unmistakable sign of the evident hunger for IPOs—tech sector flotations in particular as other sectors have been strangled by the coronavirus crisis.

Moreover, the stock market surge appears to be led by “growth stocks”, according to analysts.

“The pace of the market’s recovery is not at all unusual. What makes this cycle different is the leadership of high quality growth stocks,” MarketWatch lately reported, citing remarks in a note to investors from Jonathan Golub, chief US equity strategist at Credit Suisse.

Nevertheless, what makes Kaspi a standout among tech IPOs is its aforementioned systemic importance as a payment system and the third largest bank in Kazakhstan. One could argue that what we have here is not merely a coronavirus-inflated stock, though at the same time it is clear that Kaspi managed to raise its net income by 50% to Kazakhstani tenge (KZT) 115.6bn (€232.13mn) in the first half of 2020, mainly thanks to lockdowns.

“The key constraint on the [Baseline Credit Assessment] is the bank's high reliance on the consumer finance segment, which is vulnerable to the coronavirus outbreak,” Moody’s said in comments on Kaspi.kz bank business in July. Indeed, Kaspi Bank accounts for 32% of all consumer loans in Kazakhstan.

“In the context of retail restrictions related to the coronavirus pandemic, our e-Commerce platform is an essential partner for many companies in Kazakhstan. We are helping our retailers increase their sales, grow their business and retain jobs,” Lomtadze was quoted as saying by Forbes Kazakhstan.

“In the midst of the Covid-19 pandemic, our Super App has become more important and essential than ever,” Lomtadze has said in a separate statement. “As people’s daily lives become increasingly digitalised we expect the relevance of Kaspi.kz’s ecosystem to the unfolding digital future to only increase.”

Lomtadze’s comments were made in a positive light, but the question remains: by how much will the eventual lifting of the pandemic-related measures weaken the appeal of fintech firms like Kaspi?

Kaspi’s LSE listing has another significance. Apart from being the first Kazakh financial company to float its shares in London since AO Alliance Bank’s offering in 2007, Kaspi is also the first Kazakh company to list on the LSE since uranium miner Kazatomprom’s IPO two years ago.

Ayuna Nechaeva, the LSE’s head of Europe, has been cited as noting that Kaspi’s London listing is not only the largest made by a Kazakh firm since 2007, it is also the biggest international technology-focused IPO in London to have taken place so far this year.

Kazatomprom’s outing was meant to be the first of a wave of flotations conducted by Kazakh state-owned firms as part of a larger privatisation programme. However, KazMunayGas, Kazakhstan’s state-run oil and gas company, delayed its planned joint London and Nur-Sultan listing in 2019 amid continuous delays with other promised Kazakh listings, including those of telecoms operator Kazakhtelecom and airline Air Astana.

The successful Kaspi.kz IPO took many investors by surprise as few keep themselves appraised as to what Kazakhstan is up to abroad. The offering may prove particularly useful in putting Kazakhstan on the map for bigger and more regular IPOs than it had come to expect on the global market. While Kaspi’s big debut is still fresh on people’s minds, the Kazakh government may be wise to briskly follow up on some of those previous IPO promises, assuming the pandemic can be brought to heel in 2021.

Emerging Europe strong on women’s economic opportunities but dragged down by low pensions
Copper is the new gold
ING: Oil prices at $60, now what?