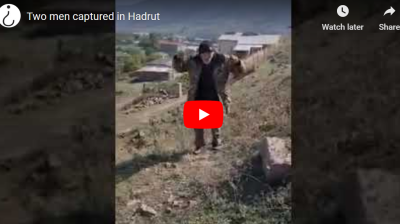 Screenshot of one of the videos indicating an execution of Armenian soldiers studied by bellingcat (to link scroll down story text).
By bne IntelIiNews October 16, 2020

Turkey’s military exports to its ally Azerbaijan have risen six-fold this year. Sales of drones and other military equipment rose to $77mn last month alone before fighting broke out over the Nagorno-Karabakh territory, according to exports data compiled by the Turkish Exporters’ Assembly cited by Reuters.

Azerbaijan, locked in conflict with Armenia over the disputed enclave, bought $123mn in defence and aviation equipment from Turkey in the first nine months of 2020, the figures also showed. Most of the purchases of drones, rocket launchers, ammunition and other weapons arrived after July, when border clashes between Armenian and Azerbaijani forces prompted Turkey and Azerbaijan to conduct joint military exercises.

October 15, the 19th day of the conflict over the enclave, saw bellingcat, an investigative journalism website that specialises in fact-checking and open-source intelligence (OSINT), post video footage and other evidence, claims and analysis which it said appeared to indicate that two Armenian combatants were captured by Azerbaijani soldiers, possibly special forces, and were “likely executed a short time later”. Azerbaijan has responded that the videos were staged.

The European Court of Human Rights (ECHR), meanwhile, rejected a Turkish request to rescind a ruling urging all states involved in the Nagorno-Karabakh conflict to avoid putting civilians at risk and to respect their obligations to respect human rights under a European convention.

The American Conservative released a report on how Azerbaijan has paid for a pro-war campaign in Washington. It has reportedly hired six K Street lobbying firms and has spent more than $1bn convincing US media and policymakers that its oil and gas reserves are at stake in the battle for Nagorno-Karabakh.

Azerbaijani President Ilham Aliyev gave an interview to France 24 in which he said Turkey has not been sending Syrian mercenaries to the battle front to assist Azerbaijani troops, as France has claimed.