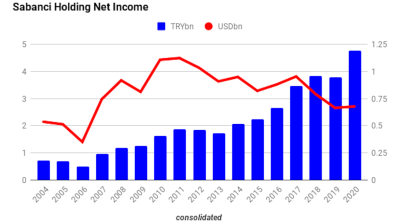 Istanbul-listed Sabanci Holding (SAHOL), the second largest conglomerate in Turkey behind Koc Holding (KCHOL), produced a 2020 profit of Turkish lira (TRY) 4.77bn, almost exactly a billion lira up from the TRY3.78bn it posted in 2019, the company said on February 24 in a stock exchange filing.

(See the chart below for the financial releases of Sabanci’s listed units).

In terms of its loss-making technology retailing unit Teknosa, Sabanci has benefited from recent interest shown in the Borsa Istanbul by individual investors.

In December, Sabanci held a secondary public offering (SPO) to sell a 10.28% stake in Teknosa.

On February 23, Teknosa announced that it would hike its paid-in capital to TRY201mn from TRY110mn through rights issues.

As a result, Teknosa’s paid-in capital will turn positive.

Also in December, Sabanci sold on Borsa Istanbul approximately a 2% stake in its loss-making retailer Carrefoursa. The move increased the free-float of the company to above 5% in line with a new regulation.

On February 24, Sabanci’s Akbank said it would distribute a TRY0.1204 gross dividend per share.

On March 30, tyre-maker Brisa (BRISA), a 43.63:43.63 JV between Sabanci Holding, and Japan’s Bridgestone Corporation, will distribute a TRY0.69 per share net dividend.

On February 25, Sabanci’s cord fabric production unit Kordsa declared a force majeure on its nylon 66 production after its two US-based suppliers for ADN, the main ingredient of nylon 66, declared force majeures for indefinite time periods due to harsh winter conditions.

The European Investment Bank (EIB) announced it signed a €2.1mn European Union grant with Bosnia & Herzegovina, to be used to finance the construction of wastewater and drinking water systems ... more

North Macedonia has signed a €70mn loan deal with the European Bank for Reconstruction and Development (EBRD) for the implantation of the trackless track project in the capital Skopje, the lender ... more

The European Investment Bank (EIB) will provide financing of €250mn for the construction of a regional hospital in Romania's third-biggest city Iasi, according to an EIB ... more