ISTANBUL BLOG: The Syria Attraction – Putin and Trump tell Erdogan to stick with what he has, but Erdogan needs more 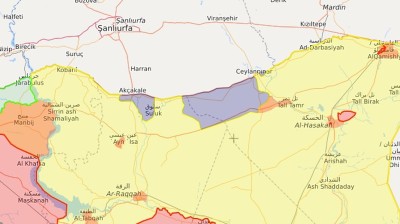 …and on the 8th day, October 16, Turkish President Recep Tayyip Erdogan’s adopted jihadists, backed by the Turkish army, appeared to halt their fast advance following the previous day’s phone call between the stroppy strongman—who, er, was still threatening to raise hell for anyone who suggested his forces should give it a break—and his Russian patron Vladimir Putin.

Putin invited Erdogan to Russia for a working visit not too far ahead and Erdogan—who nowadays appears to visit the Kremlin almost every month—accepted the invitation, the Kremlin said in a statement following the phone call. There was no such graciousness expressed towards the US, however, with Erdogan informing reporters he is reconsidering whether to visit the White House as arranged in November.

Getting back to the pressing business, Putin and Erdogan also discussed the need to avoid possible conflicts between Turkish and Syrian military units, the Kremlin statement added.

Also down the other end of the line for Erdogan on October 15 was his American patron, Donald Trump. The US Commander-in-Chief (now trying to demonstrate to the world that he can command events in northeast Syria despite having pulled out the 1,000 or so US troops who were stationed there, in the process abandoning and betraying Washington’s Kurdish buddies, not long ago instrumental in destroying Islamic State’s so-called Caliphate in Syria on behalf of Uncle Sam) had just held an apparently (puzzlingly) warm phone conversation with Kurdish Syrian Democratic Forces (SDF) commander Mazlum Kobane. He wanted to get the message over to Erdogan that he should steer clear of Kobani, a city by the Turkish border under the control of the Kurdish People’s Protection Units (YPG) since 2012.

During his flight back from a visit to Azerbaijan for a Turkic Council summit, Erdogan told correspondents that he informed Trump that his military actually has no plans to target Kobani and that the taking over of Manbij in northwest Syria by Syrian leader Bashar Al-Assad’s forces was “not too negative” for Turkey.

But all this niceness—agreeing with the lines so coincidentally convenient drawn on the battle map by his patrons to prevent any clashes between the Turks with Kobani’s defenders and the Assad forces—ain’t no good for a spoilt authoritarian. The Syria offensive has given Erdogan every chance to reassert his damaged authority in Turkey with, to put it politely, a load of nationalist tosh and noise, and there’s plenty more rhetoric and invective that he wants to put out there yet.

Since October 8, when the operation was launched, tinpot Erdogan has been entirely dominant at home—critics are few and far between when just motioning that you might be about to open your mouth with conviction can get you arrested—and that’s a feeling that he totally lost when he went down to defeat in the Istanbul and Ankara local elections (not to mention that disastrous Istanbul ‘revote’!), and half a dozen other important city polls, earlier this year.

But don’t despair, if he really must wind up his war attraction, our man will within the blink of an eye be back to whipping up polarised emotions with anything he can lay his hands on, the shadowy traitors exploiting, indeed causing, Turkey’s economic problems, and the rebels in his own party, whom he’s promised a bad end, to give but two examples.

Pence and Pompeo in town
Meanwhile, Trump’s vice man Mike Pence and secretary of the state mothership Mike Pompeo are in town. Useful, see how the world trembles and comes to Turkey as it swats aside those making a nuisance of themselves in the nation next door and warns that this invasion could get that much worse if its prescient president does not get his way (or is not at least allowed to give the impression that he’s been given enough of what he came for).

But Trump’s not the Middle East go-to guy anymore. He’s making a messy and shameful exit from Syria—though he might find himself rather more stuck in Iraq and, just over the way, Afghanistan, and he’s for now keeping the Saudis quiet by sending Riyadh more US forces—but seems to think it’s worth it to get in tune with his America First base. So the message is “Go see Uncle Vlad”.

On his latest Moscow visit, Erdogan may seek some more Syria spoils. Some developments may occur in Idlib, in the far northwest of Syria, where Russia-sponsored Assad forces have stopped advancing towards localities with Turkish-backed jihadist forces since Erdogan launched his operation east of the Euphrates (now there’s a clue as to what’s really going down here).

On the economic front, things are such a mess that it just could be that Erdogan knows he has no real chance of getting the country properly back on the rails any time soon. Forgive the impudence, but let’s suggest the plan is no longer to thrill voters with a storming recovery in the real economy but to win snap elections on a surge of Turkish flag-wrapped strength and pride—before the incursion’s dust settles down, the nationalist feelgood factor ain’t adding so much buoyancy anymore and people remember just how much of a hole they’re in.