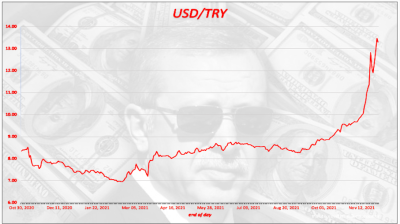 The Erdogan lira crisis took another twist on December 1 when the Central Bank of the Republic of Turkey (CBRT) announced that it was directly intervening in the FX market with selling transactions due to “unhealthy price formations” in exchange rates.

It will not help. Let’s restate some of the salient.

Since November 2018, Turkey has burnt through around $140bn worth of FX reserves via backdoor interventions in the currency market.

Various fantasies have been applied to closing the gaping lira wound since 2018. The direct burning of reserves is just the latest fantasy and rather pathetic against the scale of the difficulties.

The USD/TRY market is totally off the rails. The volatility is extreme. Different sources provide different rates. This publication references Investing.com but the server may not reflect the actual price seen on your trading screen.

After the central bank announcement on its intervention, the lira only managed to pull itself  back into the 12.40s/$ before retreating back into the 13.20s within minutes.

Five-year credit default swaps (CDS) on Turkey, meanwhile, are above the 500-level.

The current USD/TRY record stands at 13.8760 (though some sources show different figures). The record was broken after Turkish President Recep Tayyip Erdogan appeared in a TV discussion on November 30. Any airing of ‘Erdoganomics’ always spells trouble.

On December 1, Erdogan was, to great anxiety, publicly forming whole sentences again, this time at a meeting of his parliamentary group. As usual, he talked as if he was stood in a surreal world. The patient Turk has no more strength to absorb more of his hokum.

But lately, Erdogan has been on the airwaves with his out-and-out nonsense every day. If he would just shut up for a minute that would be the best intervention in the currency market.

Seeking consistency in the Erdogan regime’s moves is a foolish endeavour (as we publish this, we are hearing the finance minister has gone - story later), but one must remind oneself that prior to this morning the mainstream media were repeating the administration’s latest baseless claim, namely that it was intentionally depreciating the lira and… well at this point, we need only quote Greta Thunberg’s response to the latest so-called meaningful efforts of world leaders to get a grip on the climate crisis: “Blah, blah, blah. Blah, blah, blah.”

But back to what we have to work with. The direct FX sale by the central bank was the first such direct intervention since 2014. The exact figures on the reserves thrown to the flames will be released officially in two weeks, though Bloomberg on December 12 quoted sources as saying the damage stood at around a billion bucks.

As of November 19, the central bank’s gross reserves (which we can meanly describe as “fake” as they include a chunky amount of unusable currencies) stood at $128bn. The net reserves stood at $25bn. When swaps are excluded, the calculation is minus $35bn.

Also on December 1, the central bank said in a separate statement that it has started to conduct transactions on the Borsa Istanbul Derivates Market (VIOP).

More bunkum, afraid to say. We’ve followed the central bank on the VIOP in the post-2018 period and at this point in the lira meltdown dwelling on it would be a waste of time.

ISTANBUL BLOG: Don’t bet for or against another rate hike in early 2022. Leave it to Erdogan