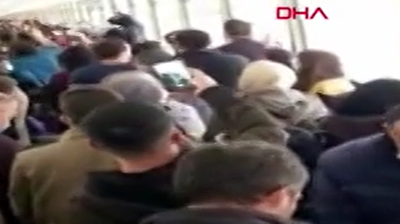 Jostling crowds of Turkey-bound Iranians captured on video at the Kapikoy border point.
By Daniel Rad in Dublin November 25, 2021

Throngs of Iranians, cheered by the collapse of the Turkish lira ahead of Black Friday shopping, boisterously passed through a customs gate on November 25, according to video footage run by Turkey’s DHA news agency.

The crowds seen at the Kapikoy customs checkpoint, near Razi in Iran’s northwestern West Azerbaijan province, were buoyed by the beleaguered Turkish lira’s (TRY’s) depreciation this week to its weakest level against the Iranian rial (IRR) in living memory (against the dollar the TRY this week at one point endured a 15% fall to an all-time low of 13.5). Given that the rial has been similarly embattled for years amid swingeing US sanctions imposed on Tehran, finding strength in their currency was quite the treat for the Turkey-bound Iranians, it seems. An added attraction for the Iranians to make the shopping trip was that the border gate was only lately reopened following a COVID-19 pandemic closure that lasted more than a year.

The DHA report said that most of the Iranians were Iranian-Azerbaijani inhabitants of Iran’s northwest in pursuit of discount deals related to the global “Black Friday” discount phenomenon (many retailers start making their special offers ahead of Friday).

In the video, Iranians are heard singing and are seen dancing at the border corridor, while one person beats a drum.

Some 3,500 Iranians were logged as having crossed the border into Turkey on November 24. Most were likely bound for the mostly Kurdish-populated city of Van, the Turkish city closest to the Iranian border.

A Turkish Customs Authority spokesman said that the daily number of people crossing into Turkey via the Kapikoy border point averages 800 in standard weeks.

Since suffering its worst ever decline, on November 23, the lira has seen a modest recovery. The TRY was trading at 11.999 versus the USD by around 18:30 Istanbul time on November 25. However, volatility in lira trading remained high.

One complication for all shoppers in Turkey is that there are reports of many retailers suspending sales while they await a stabilisation of the lira to determine new pricing.