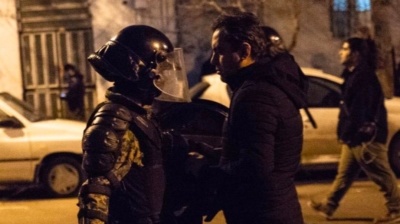 Unverified photo circulating on Twitter under #IranProtests of a man in Tehran confronted by a riot police officer.
By bne IntelliNews January 12, 2020

Observers were once more attempting to gauge the extent of anti-regime protests in Iran on January 12 as public anger over the Iranian military’s shooting down of an airliner, and failure to admit to it for three days, manifested as demonstrations on the streets.

In Tehran, security forces used teargas to break up a second straight day of protests, with protesters furious that officials had lied to the country and the world about the fate of Ukraine International Airlines (UIA) flight PS752, which, with the loss of 176 lives, crashed in a fireball in a suburb of the capital on January 8. There were fears that some protesters had been killed amid the response of the authorities, with unverified footage on social media showing blood on a Tehran sidewalk, while a male voice is heard saying “I saw seven people shot, there is blood everywhere.”

Several hundred protesters, chanting “Death to the dictator” were seen making their way to Tehran’s Azadi Square. Protests also flared up at universities in Tehran and videos posted online appeared to show demonstrations in several other cities including Shiraz, Kermanshah and Tabriz.

But not all the protesting was anti-regime. Pro-regime protesters set alight a union jack flag in front of the UK embassy in Tehran after the British ambassador Rob Macaire was briefly arrested the night before after leaving a vigil for those who died on the UIA flight—shot down by gunners of the Islamic Revolutionary Guard Corps (IRGC) who apparently assessed it as a cruise missile that had been fired at Iran in response to the Iranian missile strikes hours earlier on two military bases in Iraq used by US troops—and was accused of coordinating protests. Chanting “death to Britain”, up to 200 protesters including members of a pro-regime paramilitary organisation rallied outside the embassy calling for it to be closed.

Kicked off at university

The protests kicked off on the afternoon of January 11 outside the gates of Amir Kabi University. Students including classmates of some of those killed in the flight tragedy demanded the removal of the government. "Commander-in-chief [Supreme Leader Ayatollah Ali Khamenei] resign, resign!" videos posted on Twitter showed hundreds of people chanting in front of the former Tehran Polytechnic site on Hafez Street. At Shahid Beheshti University in Tehran on January 12 hundreds of students refused to trample on the flags of Israel and the US laid out by the student-led Basij militia based on the campus.

The semi-official Fars news agency said up to 1,000 people were protesting at various points in the capital on January 12. Some Iranian newspapers covered vigils for the plane victims, running headlines including "Shame" and "Unforgivable". But one pro-government newspaper praised Iran's "honest" admission of error, despite some officials originally denying categorically to Iranian and international media that the plane could have been brought down with a missile.

Ambassador Macaire was reportedly recording the vigil outside the gates of the main campus of Amir Kabir. “Thanks for the many goodwill messages. Can confirm I wasn’t taking part in any demonstrations! Went to an event advertised as a vigil for victims of #PS752 tragedy. Normal to want to pay respects—some of the victims were British. I left after 5 mins when some started chanting,” Macaire tweeted.

“When police informed me a man’s [been] arrested who claims to be UK amb[assador], I said IMPOSSIBLE!,” wrote Seyed Abbas Araghchi, the deputy foreign minister, on Twitter. “Only after my phone conversation w[ith] him I identified, out of big surprise, that it’s him. 15 mins later he was free.”

He wasn't detained, but arrested as unknown foreigner in an illegal gathering. When police informed me a man's arrested who claims to be UK Amb, I said IMPOSSIBLE! only after my phone conversation w him I identified, out of big surprise, that it's him. 15 min later he was free. pic.twitter.com/VjuZxN1oTN

“The arrest of our Ambassador in Tehran without grounds or explanation is a flagrant violation of international law. The Iranian government is at a crossroads moment. It can continue its march towards pariah status with all the political and economic isolation that entails, or take steps to deescalate tensions and engage in a diplomatic path forward,” British Foreign Secretary Dominic Raab said.

There are anxieties in Tehran that the UK could soon be in lockstep with the US in the formulation of its foreign policy towards Iran. The new Boris Johnson government is seen as desperate for a trade deal with Washington to help address any economic dislocation from Europe that may occur after Brexit goes through and, more and more, is staying ‘on message’ with US President Donald Trump.

Trump is regarded as a “rogue president” who tramples on international law by Iran. He ripped up diplomatic convention by unilaterally pulling the US out of the 2015 nuclear deal between Iran and six major powers—even though UN inspectors said that Tehran at the time was in complete compliance with the accord—and with the January 3 Trump-ordered drone strike at Baghad airport that killed Iranian Major-general Qasem Soleimani, the US president assassinated the de facto military leader and second most important government official of a sovereign nation on the territory of another sovereign nation with which he didn’t even consult. Thus, when Iranian officials hear foreign government figures like Raab talk about Iran as heading for “pariah” status, with no mention of the American trespasses, they bristle at what they perceive as sycophancy shown to Trump.

Any attempt to organise big protests around mass mourning for victims of the air disaster will be watched closely by the authorities, who only early last week faced an entirely different picture as the mourning and funeral of Soleimani, which brought millions on to the streets across the country, seemingly united disparate parts of Iran’s population with some patriotic fervour.

The IRGC commander, Hossein Salami, said on January 12 his forces were “more upset than anyone” over the shooting down of the plane, but other officials accused the US and its allies of exploiting the tragedy.

General Ali Hajizadeh, head of the IRGC aerospace division, apologised to the nation on television for the air tragedy. He said the Corps took full responsibility, saying he wished “I could die” when he heard about the incident.

A missile operator acting alone because of a “communications breakdown” mistook the Boeing 737 for a cruise missile heading towards a sensitive IRGC site. He had 10 seconds to decide whether to fire, he added. “He was obliged to make contact and get verification. But apparently, his communications system had some disruptions. Either the ‘jamming’ system was the cause or the network was busy,” he said.