“Of course, the sanctions are bad for business and we have been affected, but they have been no more than a nuisance,” Ilya Yakubson, president of Dixy Group, one of Russia’s leading supermarket chains, tells bne IntelliNews in an exclusive interview.

Russia’s supermarket chains were peeved when the Kremlin decided to ban the import of many European agricultural goods last summer – but not, it seems, much more than that.

The Russian sanctions were a tit-for-tat response to restrictions imposed by the EU and US following Russia’s annexation of the Crimea in March 2014 and its backing of pro-Russian rebels fighting in the east of Ukraine. According to Russian officials, while the Russian ban on European agricultural products is costing Europe an estimated $100bn a year, Western sanctions are costing Russia only about $30bn. Other studies put the cost to Russia equally as high, but clearly for both sides the amounts run to tens of billions of euros.

Nevertheless, while the sanctions might have crimped growth at Russia’s food retailers, they have not really hurt them. After a few months of trying to replace the ubiquitous Polish apples and other EU perishables, most food retailers found new sources of fresh produce in places like Turkey, Egypt, Brazil and Israel. “It was annoying, as in one month we had to completely remake a distribution system that we had built up over the last 15 years,” says Yakubson. “I know it has become a bit of a cliché, but [European] cheese was probably one of the hardest things to replace. But now most Dutch and Italian cheeses are being made in Russia.”

Dixy is no stranger to crises; a veteran of half a dozen, Yakubson has taken this one in his stride. The company’s roots go back to 1992 when it was founded as a wholesale distributor concentrating on the twin giant cities of Moscow and St Petersburg. In those days, the most money was to be made from simply importing foreign goods to stock bare Russian shelves. “It was an easy business. You could have a dirty store with no lights and poor quality space, and still have people queuing up to buy things,” says Yakubson. “That has changed now, as the customer has become more sophisticated and demands better quality service and goods.”

However, like most traders Dixy was hit hard by the 1998 financial crisis that saw the ruble cut to a quarter of its value against the dollar overnight. “Wholesalers were in an impossible position: they had to pay dollars for their goods, but revenues were in rubles. By the end of the 90s, most of the wholesalers had gone into retail as the only way to make a profit.”

In 2007, Mercury Group bought out founder Oleg Leonov and then listed the company on the domestic RTS and MICEX stock exchanges to raise funds to accelerate the expansion of the retail chain. However, the share price performance has been lacklustre, with the stock trading in a band between RUB300 and RUB500 for most of the last five years. The share price has fallen markedly this year from a peak of RUB495 on March 20 to close to the bottom of its range now, trading at RUB331 as of October 29. 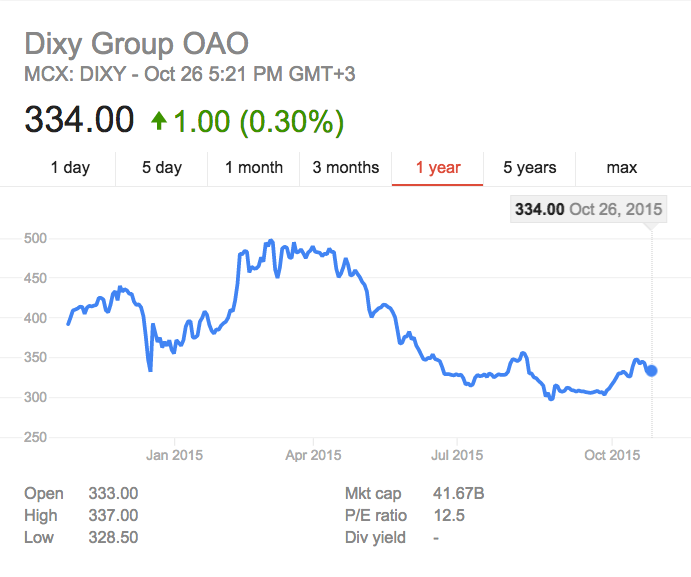 For most of the last decade and half the game in retail has been very simple: grow as fast as you possibly can to grab as much market share as you possibly can. “At the end of the 90s, the leading retailers were not in competition with each other but with the open-air markets,” says Yakubson.

Russians have traditionally shopped in the bazaars – huge open-air markets that can still be found at the heart of almost any district in any city. But the share of organized retail (modern retail formats like store chains, supermarkets and hypermarkets) have been rapidly eating into the bazaars’ share of the shopping basket: Yakubson estimates that modern formats now account for 70% of food shopping expenditure, with open-air markets taking the remaining 30%. A decade ago those numbers were the other way round.

At the end of 2008, retailing went through the whole boom-bust thing again. Arguably, that crisis was worse than any of the previous ones – and Yakubson reels off a list of them, big and small: 1993, 1998, 2004, 2008 and the current downturn that started in 2014. But like ancient Rome, irrespective of how bad things get, the population will always demand “bread and circuses” – the share of income spent on food fell from three-quarters to a low of about 25% in 2007, but it is expected to increase to over 50% this year.

While Russians have cut back on big-ticket items, like new cars or foreign holidays, they are still buying food – even if they have traded down to cheaper Russian-made goods. Indeed, even that is not clear, as a recent study found that the share of imported goods (that haven’t been banned by the Kremlin) has remained the same – just people are buying less of them.

The operating environment for retailers has got tougher. Rosstat reported that retail turnover fell by an unexpectedly hard 10.4% on year in September and real incomes are also down by 3.3% over the first nine months of this year. But, oddly, that hasn’t affected Dixy’s business much, because the last things Russians will cut spending on are tea, sugar, pasta and bread. “We are on course to open a record number of stores this year: we have already opened 400 more stores in the first nine months of this year, which is more than we opened in all of 2014,” says Yakubson.

Indeed, Yakubson claims that the devaluation of the ruble has been a lot more damaging than the ban on European agricultural imports; despite all the progress, Russia still imports some 40% of its processed foods (and most of its fresh produce), which has to be paid for in hard currency. “Some 50-70% of fruit and veg is imported to Russia, and as the cost has gone up consumption has gone down,” says Yakubson.

However, retailers like Dixy have turned to its neighbours in the Commonwealth of Independent States (CIS) such as Moldova and Azerbaijan, as well as fellow BRIC countries to fill the gap. “Of course this has added to the costs. In past crises you could pass the inflation onto the consumers, but not this time round.” Rosstat reports that the inflation of food costs was up 20% this year, well ahead of the average 11% inflation rates and that is hitting the consumer in the pocket.

All the leading retailers are reporting the same thing. Sales have been dented by the economic slowdown, but all the main chains, Dixy included, are still reporting growth. That means they have a steady flow of cash and the bulk of their investments continue to be made out of retained earnings. “No one really has problems with financing investment. Retail is one of few industries in Russia that is still growing. It would be nice if the cost of borrowing were lower, but we still use some bank loans,” says Yakubson. “We are still in a race [with the other stores] to capture as much market share as we can. We are reinvesting every penny we make.”

At the same time, the cost of setting up new stores has gone up. When Dixy opened its first store in about 1999, the fit-out cost was about $50,000, but that has risen to $400,000 per store in the interceding years

It will take many more years until the consolidation of retail is complete and Russia finally abandons its bazaars for modern shops. Currently, Dixy concentrates on its traditional markets of Moscow, Moscow region, St Petersburg, the Leningrad region and Yekaterinburg where it was established, but the company is entering a new region every year, says Yakubson. The company has launched stores in Tyumen, Orel and Kaliningrad, to mention some of the recent additions, but the pace of regional growth is limited by the need to build an entire distribution system to service those stores, which is a capital-intensive and time-consuming process.

Despite all the pesky problems Yakubson has to deal with, he is confident in the future of his company. “This crisis is a great opportunity,” says Yakubson, echoing a sentiment that bne IntelliNews has heard repeated by many of Russia’s top company executives recently. “The lower we go, the stronger the rebound will be. The autumn of 2008 was awful, but after that our business started to grow like crazy. The sanctions will be dropped eventually and the same thing will happen.”