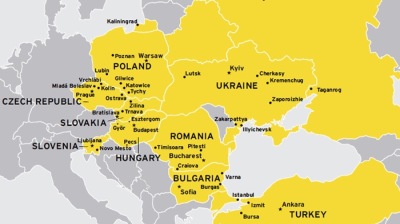 All the economies in CEE will shrink this year, but the extent varies widely
By Petr Krpata Chief EMEA FX and IR Strategist for ING April 3, 2020

All central banks in the region are in full easing mode. We expect more cuts from the Czech Republic and QE from Hungary. The pace of the CEE FX sell off should ease as FX interventions loom. The already tightly-managed Romanian leu remains one of the global winners CEE growth: 2Q20 should constitute the bottom As small open economies, the CEE countries are feeling the heat of the Covid-19 crisis via collapsing demand both domestically and globally. With world trade coming to a halt, weaker domestic exchange rates no longer act as an offseting factor to weaker domestic growth. We expect all CEE countries to show negative growth in 2020 (Figure 1), with fiscal stimulus (in Poland worth as much as 9% of GDP for example) only softening the blow. Hungary is expected to experience the least negative growth (-0.8% year-on-year) among CEE countries in 2020, while Romania will feel the biggest hit (-6.6% y/y). As for the growth trajectory, 2Q20 should constitute the bottom, with some modest rebound in the second half of this year. 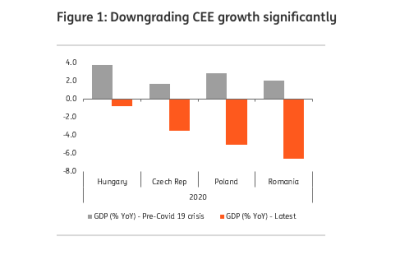 CEE central banks: Shaking up the status quo For the CEE central banks, the Covid-19 crisis heavily altered the status quo in terms of their reaction functions. The Czech National Bank, arguably one of the most hawkish central banks globally, has already slashed interest rates by 1.25% and is contemplating a soft version of quantitative easing. In contrast, one of the most dovish central banks globally up until now, the National Bank of Hungary, has lagged its CEE peers, refraining from rate cuts and QE and only providing targeted lending - perhaps due to the currency consideration. We expect the NBH to join the chorus of global central banks and eventually embark on QE, thus supporting the local bond market. In contrast, a lot seems to be already discounted in Czech and Poland (with the National Bank of Poland already embarking on aggressive purchases of domestic bonds), with the market looking for further cuts, in excess of 50bp. The CNB is likely to deliver more cuts while for the NBP, the bar to cut rates is higher. 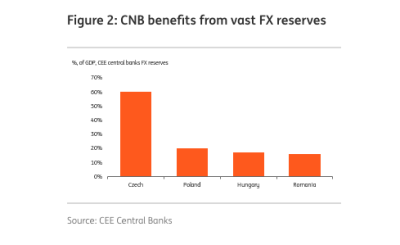 CEE FX: Entering the second (and more moderate) phase of the sell-off As for FX, we see the CEE currencies entering a second (and more moderate) phase of the sell off, with local central banks contemplating FX interventions. The National Bank of Romania is already in full intervention mode, the CNB delivered a verbal intervention, while the NBP is likely to step into the market too, should it be necessary. In contrast, we see a high bar for NBH FX purchases, suggesting that the Hungarian forint could be relatively more vulnerable in falling markets (particularly if the NBH may yet embark on QE). In contrast, the CNB's large scale firepower in the form of its huge FX reserves (Figure 2) should now stop the koruna's underperformance vs its free floating CEE FX peers. In falling markets, the tightly managed RON should continue to be a CEE winner and one of the global outperformers.

ING: Russia balance of payments: supportive of ruble in the near-term, but risks for 2H21 mount.
2 days ago
ING: Growth in the Balkans: from zero to hero again?
8 days ago
FPRI BMB Ukraine: Most Ukrainians are optimistic about 2021 – poll
9 days ago
COMMENT: Record high debt levels will slow post-coronavirus recovery, threaten some countries' financial stability, says IIF
11 days ago
COMMENT: The Manafort Pardon: a finger in the collective eyes of Ukrainians
17 days ago