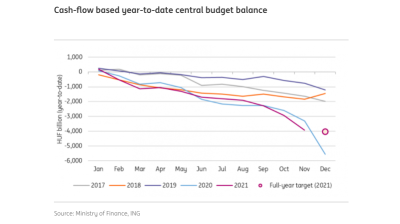 After Hungary's inflation hit a record not seen since the end of 2007 in November, now the budget deficit is hitting new all-time highs.
By Peter Virovacz is a Senior Economist with ING in Hungary December 9, 2021

Hungary's monthly deficit in November broke an all-time record with a more than HUF1 trillion (€2.73bn) shortfall. It just shows the strength of the current fiscal thrust.

After we saw November's inflation number hitting a record not seen since the end of 2007, we didn’t have to wait long for another record to break. This time it is the Hungarian budget, which posted a HUF1,009bn cash flow-based monthly deficit in November. With this, the year-to-date fiscal shortfall comes in at HUF3,931bn, equalling 98% of the amended full-year deficit plan.

Against this backdrop, there is not much room (only HUF92.7bn) for manoeuvre for the government in December to comply with the deficit target. The average monthly deficit in the past six months was around HUF440bn and checking the monthly deficits in December, the historical average sits at HUF220bn. Given all that, it's hard to think how the government will be able to comply even with the amended full-year cash flow deficit target.

What is important to note here is that the Government Debt Management Agency is well ahead of its issuance plan, which means that if the government doesn’t want to comply, they have the much-needed financial room to do that. Moreover, as this target refers to the cash flow-based deficit and not to the Maastricht criteria, the meaning of breaching this target is less important from a policy perspective.

The only binding rule – as the European Commission suspended its fiscal rules temporarily – is the national fiscal rule. According to our calculations, because of the strong nominal GDP growth, the debt rule is not in jeopardy, so the debt-to-GDP ratio will drop even if the government doesn’t comply with its own deficit target.

As the budget was burdened by one-off expenditure, such as pension bonuses and the compensation for pensioners due to high inflation (these amount to HUF250bn), we expect a much better deficit figure in December. But what is more important here is that during the fourth quarter of 2021 and the first quarter of 2022, the government has spent and will spend HUF4.8tn to support the economy. This contains the pension bonuses, one-off bonuses for the armed forces, a tax refund for families, PIT cut for those aged under 25 and also a 4ppt cut in the payroll tax, not to mention the several public financed investments.

All of these measures will push the aggregate demand higher in the Hungarian economy, which suffers from supply shortages in several areas (spare parts, labour, etc). This will just add to the inflation pressure, which has already hit the highest level in 14 years. In our view, fiscal consolidation needs to start as soon as possible and needs to be carried out quickly to mitigate the risk of medium-term high inflation. We see this happening only in the second half of 2022 at the earliest, as Hungary is facing a general election in spring next year. 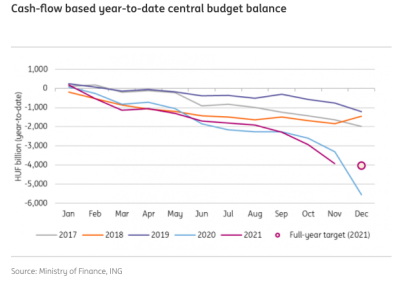