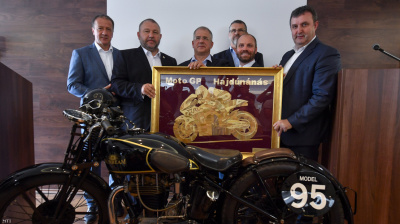 Hungary is building a MotoGP racetrack in the northern part of the country with a HUF65bn (€187mn) investment, it was announced on June 19.

The investment includes service facilities, training and conference centres and a hotel. The eight-year agreement with Dorna Sports, MotoGP’s rights holder, will start in 2023, Minister of Innovation and Technology Laszlo Palkovics said on Friday.

Investments like thsese can help the economy return to growth quickly, he said, adding that similar developments would boost the region and help it to become a new node in Hungary’s automotive industry. Palkovics paid tribute to world speed champion Gabor Talmacsi, who attended the event, for "putting Hungary on the map of MotoGP".

The government has decided to change the venue for the racetrack. Hungary was the host to the to MotoGP races in 1990 and 1992 at the F-1 racetrack Hungaroring. The social-liberal government in 2007 planned to build a new racetrack near Lake Balaton in Savoly.

Construction work on the €200mn project led by Spanish investment group Sedesa started in late 2008, and the facility was due to host its first MotoGP race on 20 September 2009. Due to the financial crisis, the investor pulled out of the project.