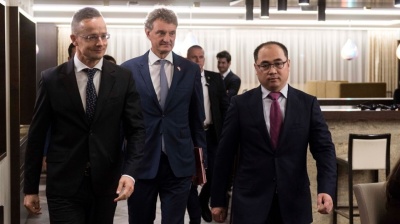 By Tamas Szilagyi in Budapest November 28, 2019

Bilateral ties between Hungary and China advanced further with the launch of a new direct flight between the two countries, while Hungary's finance minister is in China for talks on the financing of the Budapest-Belgrade railway upgrade, a multi-billion dollar project. Hungary is striving to lure ICBC, the world's largest bank to set up a regional office in Budapest, according to media reports on November 27.

Hungarian-Chinese relations have never been as strong in the last seventy years. China is Hungary's largest business partner outside of the EU with bilateral trade rising to $9bn last year, up 10% from the previous year, Minister of Foreign Affairs and Trade Peter Szijjarto said at a press conference at Liszt Ferenc International Airport, where Hainan Airlines announced the launch of direct flights between Chongqing and Budapest from December 27.

The Chinese carrier previously operated a direct link between Beijing and Budapest until Hungary's national carrier Malev went bankrupt in 2012. From December, it will operate flights twice a week. As a result the number of flights between the two countries will increase to 13, the most in the region, Szijjarto added.

The number of Chinese tourists in Hungary quadrupled between 2010 and 2018 and reached 210,000 in the first ten months.

Budapest Airport expects some 250,000 Chinese passengers to use the airport in 2019. The airlines connecting Hungary and Chine offer 350,00 seat capacity next year, CEO Rolf Schnitzler added.

The conservative government of Viktor Orban stepped up efforts to improve political ties with China by the launch of the government's Opening to the East policy in 2010. The plan involved strengthening ties with countries outside the EU, mostly in fast-developing countries in Asia.

Finance Minister Mihaly Varga is in China for talks on the financing  of the upgrade of the railway connecting Budapest and Belgrade.  He held a meeting with the Chinese Minister of Finance Liu Kun in Beijing and with leading executive of China's Eximbank and a vice-chairman of the National Development and Reform Commission. Budapest hopes hat an agreement on Chinese credit could be sealed before the end of the year.

The €2.3bn project will be carried out by a Hungarian-Chinese consortium. The Hungarian party is RM International, owned by Lorinc Meszaros through BSE-listed Opus Global. Meszaros is Hungary’s most powerful oligarch and a close friend of Prime Minister Viktor Orban.

The reconstruction of the 152km line of the Hungarian section will be the largest railway development program on record in Hungary.

The project involves rebuilding the railway as a double-track main line, with a maximum line speed of 160 km/h and a design speed of 200 km/h.

Founded in 1984, ICBC, with $4 trillion in assets, is the largest bank in the world with 426 offices in 47 countries.The ICBC is ready to play an active role in the issue of renminbi bonds and supports cross-border renminbi business relations, payment transactions and financing of Hungarian infrastructure projects, according to the document.

ICBC is considering opening a regional office in Budapest as part of the Belt and Road Initiative (BRI). The parties agreed that the presence of ICBC in Hungary would further strengthen the country’s role as a regional financial centre.