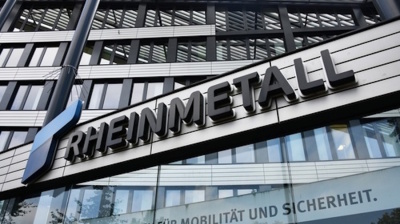 Rheinmetall, which gained a 24% stake in 4iG last year, is involved in a number of large-scale investments in Hungary, which are set to reach €600mn.
By bne IntelliNews May 17, 2022

BSE-listed Hungarian IT company 4iG signed a preliminary agreement on the establishment of a joint venture with Germany's Rheinmetall and Hungary's state-owned defense contractor HM Electronics, Logistics and Property Management on May 16.

The JV aims to participate in the digitalisation of the armed forces in Hungary and selected Nato member states in the CEE region by developing digital combat system solutions as well as ground and flight simulation systems for the provision of the most modern soldier training, it added.

Under the agreement, Rheinmetall will hold a 51% stake in the defence industry company, while 4iG will own 39% and HM Electronics, Logistics and Property Management 10%.

The JV, expected to start operating in H2 2022, will "develop and sell digitalisation solutions, land and airborne simulation systems for the provision of soldier training within all combat areas and command levels and equipment based on C4ISTAR capabilities", 4iG said in a statement.

Rheinmetall will bring its "international military expertise" and know-how to the JV, providing technology for components, products and military capabilities. CEO Armin Papperger said the new partnership serves to support the strategic efforts of Hungary and other CEE countries in the digitalisation of their armed forces and "the achievement of the highest level of Nato compatibility".

4iG will chip in with its "strong IT and telecommunications background, cyber defence and development expertise, and its own significant infrastructure and capabilities to provide the appropriate software development environment", 4iG said.

The IT company – owned by Gellert Jaszai, the right-hand man of Hungary’s most powerful oligarch Lorinc Meszaros – has completed a string of acquisitions in Hungary and abroad, creating a leading telecommunication group in the CEE and SEE region.

Rheinmetall, which gained a 24% stake in 4iG last year, is involved in a number of large-scale investments in Hungary, which are set to reach €600mn.

The company is building a HUF60bn plant next to the ZalaZONE test track for autonomous vehicles under construction. The plant will make 172 of the 218 Lynx combat vehicles for the Hungarian Armed Forces.

In January 2021, Rheinmetall Hungary agreed to set up the company’s second base to manufacture and develop 100 wheeled combat vehicles a year.

The ammunition plant 75km southwest of Budapest would start operation in 2023 and generate billions of forints of revenue, he added.

Viktor Orban's government now regards the defence industry as a new pillar for future growth besides traditionally strong sectors such as the automotive industry, electronics, pharmaceuticals or food and agriculture. Defence spending is set to exceed 2% of GDP in 2023.

Wargaming closed its studios in Russia and Belarus following the military invasion of Ukraine, and is now adding new studios in Central and Southeast Europe.

Romanian crowdfunding platform SeedBlink helps Bulgarian startup Agriniser raise funds
3 days ago
Investments into Serbian startups soared more than 600% in 2021
3 days ago
Uzbekistan’s IT sector on fire and targeting the vast US market
6 days ago
EWDN: Yet another Ukrainian-founded unicorn: airSlate raises more than $50mn in the US
8 days ago
Wargaming opens studios in Belgrade and Warsaw after pulling out of Russia and Belarus
10 days ago