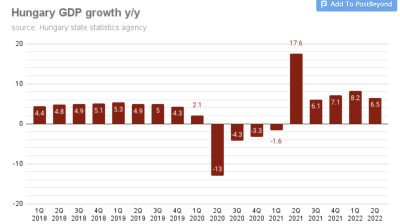 Hungary’s economy expanded 6.5% y/y in Q2 (chart) according to both adjusted and raw data, slowing down from 8.2% in the previous quarter, well above the EU average and beating analysts’ expectations, the Central Statistics Office (KSH) said in a first reading on August 17. Higher wages and pre-election fiscal transfers boosted domestic consumption and supported the performance of market services, jumping from a low base.

Compared to the previous quarter, the economy grew 1.1% and output was 7.3% higher in the first half on an annual basis.

KSH said all branches of the national economy contributed to headline growth, except for the farm sector, which is hit by draught. Growth was supported especially by industry, particularly food and drink production and electrical equipment manufacturing, and by market services. Detailed figures will be released on September 1.

Q2 GDP growth beat expectations and was among the highest in the European Union on a quarterly and annual basis, Magyar Bankholding chief analyst Gergely Suppan said.

Looking ahead, the short-term outlook is rather gloomy as increased energy and raw material prices and supply chains problems are weighing on the outlook for industrial exports, it added.

Hungarian analysts expect this year's expansion to be between 5-6%, which assumes that output in Q3 and Q4 growth will be flat or could even slip to negative territory.

Protracted double-digit inflation and tightening of monetary policy will curb investments and the partial phase-out of retail energy subsidies will cut back consumer spending in the second half, according to analysts. The slowdown in retail sales and construction in June are flashing signals of decelerating growth.

In a recent interview, Prime Minister Viktor Orban said the government’s main task is to ensure that Hungary stays out of a looming global economic recession. "This will be quite difficult, not least because Germany, our most important trading partner, is contracting rapidly", he added.