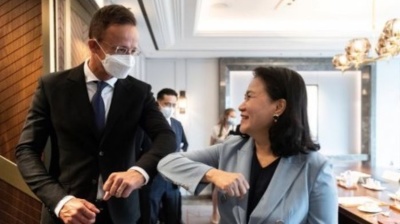 South Korean companies are planning to invest several hundred million euros in Hungary in the coming months, Minister of Foreign Affairs and Trade Peter Szijjarto said during an official visit to Seoul on July 27.

Samsung SDI is spending €1.2bn to expand its battery plant on the outskirts of Budapest. SK Innovation is building a HUF239bn battery plant in Komarom that will create about 2,500 jobs.

"These Korean companies are expressly satisfied with circumstances in Hungary, and especially appreciate the political stability, Hungarians' love of work, their competence and diligence and they especially appreciate Europe's lowest taxes, including the lowest corporate tax rate in Europe," Szijjarto said.